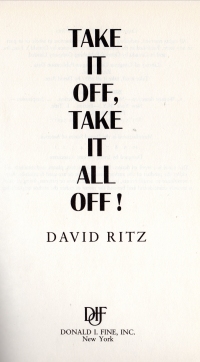 As you can guess, I selected this book from amongst the thousands of others from some past book fair because its title is a cat call for a stripper to remove all of her clothing. Or it was. When I was a boy, my brother and I would occasionally say that to each other when changing clothes or something. Given that we hadn’t been to many strip clubs by the time we were ten, I would have to guess we picked it up from cartoons.

At any rate, this book is about a stripper. In the first chapter, she finds that a younger woman whom she’s been teaching the stripping world to has been brutally murdered, and the main character wants to find out who. So you think it’s a murder mystery, but that’s just a MacGuffin. Instead, it’s a book about a woman who fancies herself world-wise discovering she’s not so world wise at all.

Set in 1945, the book spends a lot of time on the stripper’s Jewish family whom she shocks with her profession. Her father lost his clothing store in the Depression and hopes to get it back; her mother likes the nice things she can buy with her daughter’s unsavorily acquired funds; and her brother is gay. Turns out the young, innocent girl from the small town who got murdered wasn’t so innocent at all–she was seeing a lot of men and hoping to take over the main character’s star slot. And she might have been going with one of the main character’s boy friends, a minor league ball player. To get insight into the murdered woman, the main character goes to the dead girl’s home town, talks to some people who knew her, falls in love with the drunken editor of the local paper, and is heart broken when the man dies in a drunken smash-up. Then she goes to sojourn in California with her uncle and his girlfriend, and they treat her nicely until they’re rubbed out in a mob hit when she’s not with them. So she returns to New York, briefly reunites with her family–she’s out of work as a stripper, you see, because of an, erm, over the top performance one night. But she can’t settle down, so she strips again and finds her baseball player boyfriend has been arrested for the murder, so she investigates and finds he has a twin brother rapist in Buffalo, so she leads police to him and they arrest the twin brother, but he was in Buffalo at the time of the murder. Then she takes up with the saxophone player in the band, who is black and a jazz maestro, and then he arrested for the murder, which leads her to suddenly discover that the boyfriend of the original murderee was killed in the same fashion, which leads her back to the home town to find the real murderer–the crossdresser who had been the inn keeper for 25 years. And the stripper and the jazz player move to Paris. The end.

You know, it works slightly better in the book, but the murder is just a pretext for the rest of the story which is a bit outlandish in its retconning of contemporary social mores and laxness into 1945, but it does pretty well at peeling the main character’s veneer of mistaken worldliness. I’ll be honest, as I read it, I wondered if it would end up with the same twist as Magic, but instead it’s a tacked on Psycho.

So would I recommend the book? Well, if it sounds interesting to you, I suppose. Billie Holiday makes multiple appearances and is a minor character in the book, so it’s got that going for it. But it’s not a murder mystery, and it’s not great literature.