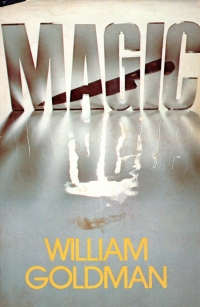 You might be familiar with William Goldman for a little book he wrote and adapted for the silver screen called The Princess Bride. This book ain’t that.

Instead, this is a mid-1970s crime thriller about a magician/ventriloquist on the verge of television success who flees from New York City to his hometown upstate because he’s afraid he might be cracking up. Then he cracks up. With a body count.

I’m afraid I’ve given much of the story away, but in the book, Goldman presents it as a little bit of a mystery. He has some diary entries that are labeled as part of a police investigation; then we have some interplay between the main character and his partner; then we have a flashback to the main character’s youth and early career and how that has led him to the precipice of success and this crack-up. So there’s some suspense in what sort of crime will occur, and it’s unfortunate what does transpire.

I thought the book was okay, but it does have a 1970s feel to it in the same way that 1970s science fiction does. Or is it just me?