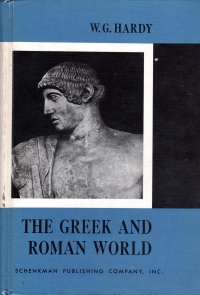 This book is a sociological anthropological look at the Greek, particularly the Athenian, and Roman civilizations. It takes the point of view of an average citizen and describes what the world might have looked like to them, from going to the Forum or the market to participating in the democracy or republic of the time. As such, it’s not a history per se, as it does not recount historical dates and actions, but instead describes how people would have lived and how society, the government, and commerce would have looked.

The book is very brief–120 pages roughly–so it’s not a long read, and you might learn something. I learned how Athens divided itself into ten entities for the purposes of government, and that every entity was not a contiguous region but instead had land and citizens in each of the three topographies of the area so that the miners, the fishers, and the farmers would be equally represented. That’s interesting. But unlikely to show up as a question on trivia night.

But the book supplements some of the other reading I’ve done in ancient history and philosophy lately, so I’m glad to have read it.