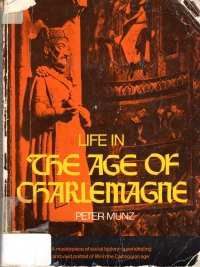 As I just read The Carolingian Chronicles, when I saw this book on my shelves, I knew I had to read it next.

This book, unlike Carolingian Chronicles and The Life of Charlemagne, is not a primary source; instead, it relies heavily on social anthropology to explain how these backwards people were. As such, you have to look at it as though it the prism of someone in the 1960s applying his or her own theories into the historical record. You get that with any history, of course, but in this case, the distance between then and then and then and now require a bit more distance.

Especially as this book is not narrative in nature; it does not tell the history from start-to-finish, year-to-year. Instead, the book takes different topical matters (The Rich, The Poor, Government, The Church, and so on) and then discusses that topic from a historical anthropological perspective about how they relate to one another. Here’s a hint: It was brutish for the poor and slightly less brutish for the rich. The book talks about the Christianity of the Franks, but repeatedly emphasizes that it was a cynical tool for controling the conquered people. It’s hard to get into the heads of contemporary people, and it’s probably impossible to get into the heads and hearts of people who lived over a thousand years ago, so contemporary–or fifty year old–attempts are suspect. Short of a handwritten diary, we really can’t know the interior motives.

Aside from that quibble, the book also has some repetitiveness that it should not. In a number of places, thoughts and even phrases are repeated to convey the same thing, sometimes mere paragraphs later.

So it was a quick read and reinforced some of the names and dates that I read earlier (I hope). I’ll have to sometime soon explore my stacks to see what else I have in this vein.

One side note about the book: The volume I have is an ex-library book from the Cor Jesu Academy in St. Louis, Missouri. It still has a card in the back, but the mylar dust jacket had a barcode on it. The card has stamps from 1980 to 1991. So the book itself might have resided there from about the time of my birth through at least my college years; when I was in high school, several girls my age borrowed this book to write reports. And now I’ve read it for fun and for a simple blog book report.