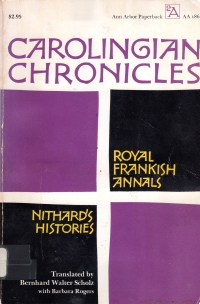 This book reads like a gritty ninth century reboot of The Gallic and Civil Wars by Julius Caesar. This volume comprises two separate primary documents contemporary to the events: The Royal Frankish Annals written by one or more unnamed sources during the reigns mostly of Charlemagne and Louis the Pious and then Nithard’s Histories which is about the civil wars amongs the Frank children of Louis the Pious.

Given that most of the Royal Frankish Annals deals with conquering Gaul and then repeatedly fighting, co-opting, and fighting some more the German tribes, you can see where I draw the parallel. The difference lies in the prose: This is official stuff written by someone other than the officials. We get a page or so of description of each year, with an outline of the campaigning against a single foe, a couple of meetings amongst the heads of the tribes either paying respect to or getting called out by the Holy Roman Emperor at annual meetings. Then the emperor goes back to Aachen. It happens mostly that way every year, so it’s repetitive, and the lack of detail for any campaign makes it all blur together.

Nithard served Charles the Bald in the civil war that followed the death of Louis the Pious, so his histories, like The Civil War of Caesar, tell a story for a contemporary audience that casts one side in a better light. Charles and Louis (not the dead one, obviously–his son) take on Lothair. Come on, with a guy named Lothair, we modern audiences would have picked him out as the bad guy even if Nithard had not chronicled how he kept breaking his promises. Spoiler alert: There aren’t many children named Lothair, so you can guess who wins.

The book is 174 pages plus end notes and index. Longer than The Life of Charlemagne, a work contemporary to it. And I’ll probably remember only a couple nuggets from it. Mostly that Lothair lost.