There was a time I thought I’d start a blog called The Miser Chronicles to enumerate various things I do that are cheap. However, I don’t think I could have sustained it, as I don’t do all that many things that are cheap. Those were in the heady days where I thought blogging would be a thing. I mean, I started a blog about making beaded jewelry, for crying out loud. A blog called Draft Matt Blunt 2008. I bought a domain name for a gardening blog called The Weakened Gardener. Let’s face it, I liked puns in blog titles.

One thing I do that saves a bit of coin: I use old table cloths as drop cloths when painting. 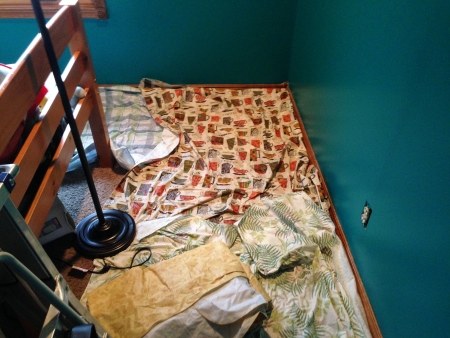 We have children, so they have marred the top of a nice wooden dining room table we bought along with Nogglestead. Then, belatedly, we discovered vinyl tablecloths and started using them. However, with children and particularly cats, it’s only a matter of time before the surface of the table cloths are marred themselves with claw marks and whatnot.

Instead of throwing them out, I’ve been saving them. Okay, it was for potential crafting use, like if I needed the background for a shadow box or something. DON’T JUDGE ME!

But I did find a use for the table cloths: They make great drop cloths. My sainted mother used to use old sheets, but the permeable surface meant paint drips could soak through. The vinyl tops of the table cloths are impermeable to paint (unless you manage to drop the paint on a cat claw mark, in which case your luck was already bad). They’re thicker than the plastic drop cloths you buy in the painting section of the hardware store, so you don’t have to worry about putting ladders on them. And a lot of them have flannel backs which means they won’t slip on carpet (but will on wood or tile, so be warned). And they’re hardy enough to hold up for a long time.

So there’s a free tip for you. If you make use of it, feel free to share some of those valuable Zimbabwean dollars you might have otherwise spent (each project) with me.