When you open a Rogue Warrior, you should know what you’re getting. A vulgar, fourth-wall-breaking, gung-ho voice that is engaging but on the edge of obnoxious; a backdrop of military political machinations; and set piece gunfights and battles. This book is no different. As the second book in the series, it would be setting the pattern yet, not merely repeating it.

In it, the Green Team, which is the current team of Marcinko’s black ops group, takes down a bad guy in Egypt; when the fellow dies in transport, Green Team become wanted by their unappreciative superior. A group assassinates high ranking military officials in Britain, and Green Team has to find out who did it and exact revenge. They find a Muslim group with inside contacts responsible, and the group’s next plans include simultaneous biological attacks across Europe.

So it’s on par with the other Red Cell/Green Team books I’ve read: It’s a lot of fun, but the political nonsense bogs it down, and it goes on just a couple dozen pages too long, usually about one set piece, where the voice starts annoying. But widely spaced, they’re good fun reads.

This book is most noticable, though, for its prophetic nature. It talks about how easily terrorists move through Europe because there are no internal border checks; it talks about a leader “leading from the front” as a contrast to a president without a military molecule in his body. Additionally, it features said President–Clinton at the time–who is sometimes reluctantly cudgeled into doing the right thing (often by his wife, who twenty years later is running for president).

It’s a pretty timeless book in that way; the president is not named, and although there’s some political stuff and bashing, it’s pretty much the individual-versus-the-system sort of stuff that has been pretty common in thrillers and paperbacks forever, without the political garbage that became commonplace in the 21st century (this book is timeless enough I forget how old it is). Also, the threat of international Islamic terror supported from inside the West is sadly contemporary as well.

A pretty good read. Better than a post-Pendleton Executioner book, for sure.

Suddenly, my son turns up the radio whenever he hears “Rumor Has It” or “Hello”.

So I tell him, “Dude, you’re getting Adele.”

He doesn’t get it.

When I heard Adele on the radio:

I thought, “She’s younger than Joss Stone.” Which blew me away. About a decade ago, St. Louis radio had 104.1 Red, which was an actual broadcast radio station that played Big Bandish, Tony Bennett, light swing jazz sorts of things that included Joss Stone. A teenaged British wunderkind singing “I’ve Got A Right To Be Wrong”:

So I looked into it.

Actually, because Joss Stone was a wunderkind who hit the radio in her teens and because Adele is a little older than I thought, they’re closer in age than I’d expected. Joss is a little over a year older.

But a decade later, I sure miss the radio station. I’ve picked up three Joss Stone albums since then, zero Adele. But not for long. And if I do, I’ll be sure to hide them from my child.

So Tuesday night and Wednesday morning were very windy down here in the Ozarks. It always gets pretty windy during the springtime, and this El Niño-inspired winter, it’s been springlike and windy. Tuesday night and Wednesday morning we had pretty solid blowing with some gusts prolly up to 40 miles an hour, and there’s not much on the west half of Nogglestead to slow them down. On Wednesday morning in the freezing twilight, I went out to my truck, parked in the driveway, to get my sunglasses; I’d left them in the pickup on Tuesday after having picked the children up for school.

As I opened the truck door, a veritable whirlwind of Pokémon cards whipped up and out across the front lawn. The boys had left them in the truck after their trip the evening before, and the surging wind caught them and threw them across an acre of land. So I did slammed the door and chased the blowing cards. Gotta collect ’em all.

When all was said and done, I could barely close my frozen fingers around an inch and a half stack of the cards.

In the days in between, I’ve continued to find cards in the yard.

I’m trying to collect them before the children realize what happened to them. More importantly, before any blow into the farm road slightly ahead of a tunnel-visioned second grader and a septic pumper truck.

I’ve never played Pokémon. But I have lived it.

Marco Rubio does not have blond hair.

Why is he getting a pass on this falsehood?

Here’s a bold prediction you’ll find everywhere else: Amazon Prime will evolve out of its actual benefit of offering free shipping on Amazon purchases to merely streaming content and giving its members exclusive access to a box that you can see filling up as you add items to your shopping cart.

Now, we see this:

But undoubtedly Amazon will offer ship-to-store for free someday, just like every other retailer does now (and did in 1990).

Concept for a movie. Okay, not a movie, but a great climactic chase scene:

The good guys and the bad guys are at a construction site. The bad guys try to flee in one of those tractor-trailers pulling an oversize load excavator. The good guys pursue in another of the same. After jockeying for position on the way out of the construction site, the bad guy climbs out of the cab and makes his way into the cab of the excavator and starts it up. As he starts trying to use the excavator to attack the other truck, good guy #2 (Mel Gibson as Martin Riggs again? One can hope!) climbs out of the cab of his truck and does the same, and we’ve got two excavators fighting from the back of trucks as they twist and turn on mountain roads. Box. Office. Gold.

I bet this is how Michael Bay works.

It’s funny how my brain sees things in patterns, detecting similar things and assigning significance to them. I’ve written a little before about Jeopardy! being the nexus of all human knowledge, but that was really an example of it. I’d see something on Jeopardy, and then my brain would flag it when I saw it again, usually soon thereafter.

Yesterday, I got a dose of this brain matchmaking.

I went to the library with my children, and there’s a Rubik’s Cube, something I hadn’t seen for a while. Then we go to the dojo, and one of the kids there is playing with a Rubik’s Cube. Have they become the thing again?

So not only did I see two things in different places, but I did it twice.

Perhaps there’s a Philip K. Dick-style novel in it somewhere.

Spotted at the Walmart: 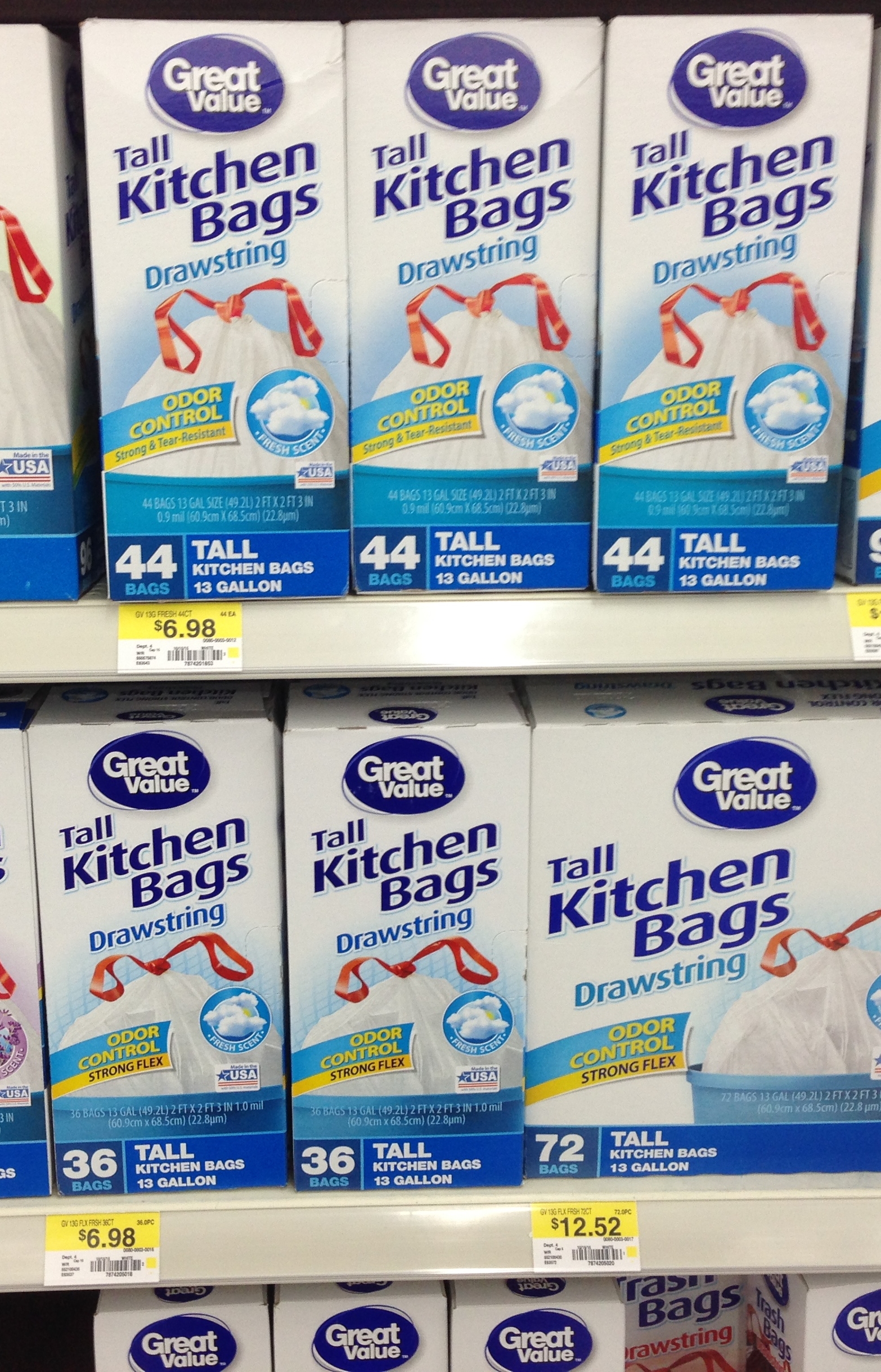 Yes, one has force-flex bags and the other has scented bags, but I saw the same thing for each corresponding type (that is, there were boxes of 36 scented bags for $6.98 and boxes of 44 force-flex for $6.98, but they weren’t together for a quick snap.

Perhaps it’s a tax on people who don’t look at the boxes and shelf prices carefully.

All I know is that it made me pause for longer than it should have when I was trying to just get some garbage bags. I looked like a discerning refuse containment customer as I looked very carefully to see what the heck was going on and why the different-sized boxes had the same price. And I couldn’t find an answer.

It’s probably that the smaller boxes will be replacing the larger at the same price, but they’ve got both slotted till they sell out of the larger quantity boxes. I think so because I’m cynical.