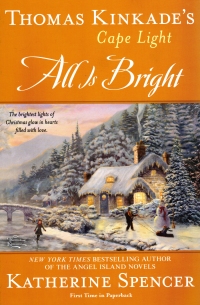 This book is one of a long series based in Cape Light, and the series is based on the paintings of Thomas Kinkade. I picked this first of the three books I bought because I just read this book based on the works of Kinkade (apparently, “just” in this context means three months ago). You know it’s only a matter of time before I have a Kinkade painting print hanging somewhere in my house.

At any rate, the book itself tells two stories in parallel: In 1978, the new pastor of a church in Cape Light prepares for his first Christmas at the church while his in-laws are up from the south to see the daughter he took from them and his new baby and must deal with the arrest of the church treasurer for business financial irregularities. Meanwhile, in the present day, the pastor’s daughter, a recent widow, deals with her children and her son’s resistance to her dating his basketball coach.

I kept hoping the two plotlines would come together, but they did not; all that they shared was Cape Light and the main characters 30 years apart.

I wanted to enjoy the book more than I did. It’s a pleasant couple of slice-of-life stories, but it was just a little off in small details that I kept getting hung up on. For example, in 1978, we have this: “As he expected, the phone rang and rang. Ben was sure it was off the hook again.” Those of us who are old enough to know recognize that a phone off the hook produces a busy signal, not ringing. Or the turn of phrase “The trustees meeting was fairly routine. Each year the churches of Ben’s particular sect of Protestantism were bound by charter to present an annual report of all activities to their members.” The word denomination would have fit better here; sect sounds like a term a non-Protestant would use. When describing what the pastor is wearing to service, it mentions his robes and his scarf; the Lutheran word is stole. And when the treasurer is in trouble and arrested, the pastor doesn’t intrude upon him in his moment of turmoil. Now, I’ve not been to the seminary myself, but I’ve been attentively attending church for a couple years, and this just doesn’t ring entirely true.

So although I undoubtedly have destiny that includes one or more Kinkade paintings, I doubt I’ll revisit this series. This book was nice, but a bit off and a little disappointing in the Christmas payoff.