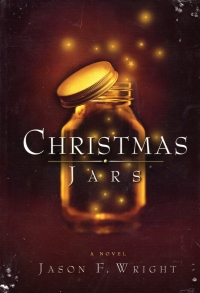 As you might remember, gentle reader, I like to pick up a Christmas book now and then around the holidays to see if I can get a touch of the old Christmas feeling instead of the modern, I’m-the-adult-providing-the-old-Christmas-feeling-for-my-kids feeling. So I bought this book at some book fair in the recent past, and as it neared Christmas, I picked it up.

It’s a short little book (as Christmas novels are), and it’s blurbed by Glenn Beck. Jeez, getting your books because Glenn Beck liked them might be as risky as getting a book Rush Limbaugh mentioned it.

The story revolves around a girl who was found in a diner on New Year’s Eve. The woman who found the baby adopts her and then dies of cancer. The woman who had been the baby is now a reporter for the local paper. Her apartment gets burglarized not long after her adopted mother’s death, and a jar of coins appears on her doorstep. She investigates the jar and discovers others have received similar jars in past years. When the next recipient receives one, the intrepid reporter contacts the recipient and is given a clue to who might be behind it. She talks to a family that runs a furniture restoration business out of its garage and becomes close to them, enjoying their family occasions and traditions even as she frets about getting to know them under false pretenses–she pretended to be a college student doing a piece on small business instead of an investigative reporter. She learns the family is behind the jars and does an expose on them, and then avoids them. The father of the family dies, and she reconnects with the family just as a parade of other people who have begun filling the Christmas jars leave them with the family. Including, of course, a woman who proves to be the mother of the adopted girl.

It’s an interesting plot, good enough for a Christmas novel, but unfortunately the execution is a bit….underdone, overt, melodramatic. Something. The characters are not very deep, and the events move at a pretty quick and sudden pace. It’s not the best of Christmas novels ever, but on the other hand, Glenn Beck blurbed it and it undoubtedly sold more copies than my only published novel. So.

(The other Christmas novels I’ve reviewed over the years include A Christmas Carol, Home for Christmas, and The Christmas Shoppe.)