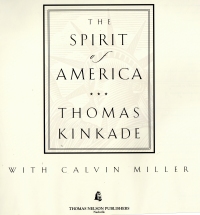 When you buy a book with an artist’s name on the cover, you might expect to get a collection of the artist’s work. This book is the exception that proves the rule in the old-fashioned meaning of the word prove, wherein it means “tests.” And in this particular case disproves the hypothesis.

Don’t get me wrong,there are a handful of Kinkade’s works in the book. But the bulk of it is about thirty small chapters wherein Pastor Calvin Miller has created the story of an American immigrant from Belgium who talks about his life coming to America at the turn of the twentieth century and the progress he sees as he lives with his father on a small town in the middle of America throughout the century. Ultimately, it’s late 1990s end-of-history pablum, and we here two decades into the future are a more feral bunch. Amid the copy, we generally get a single Kinkade painting with various closeups presented.

To make matters worse, this ex-library book has at least two of the images of the paintings missing. Someone cut them out of a library book. I hate to think that somewhere in Christian County, Missouri, there are framed Kinkade pictures from this book. Perhaps someone gave them out as Christmas gifts.

And before you get all Internet-snarky on it, I was interested in seeing more of his work. I think some of them are pleasant and nostalgic, not unlike Currier & Ives. I don’t have any Kinkade in the house, but I’ve got some Renoir, and the only thing that differentiates Renoir from Kinkade is Renoir is French and his paintings are blurry.

So I’m disappointed in the book, but not the artist.

2 thoughts on “Book Report: The Spirit of America by Thomas Kinkade with Calvin Miller (1998)”