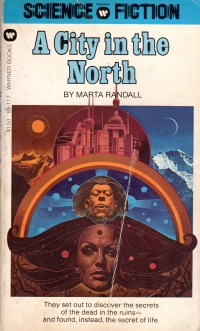 This book should fit right into my wheelhouse: An abandoned city of an advanced civilization lies on a planet inhabited by intelligent, but primitive, ape-like beings. A shipping magnate and his off and on again rival shipping company magnate wife arrive on the planet to steal into the restricted area to visit the city. On planet, they find a mostly impotent governor tending a native garden while members of the corporation running mining operations on the planet run most of the show. The corporation members look at the tourists as though they were agents trying to figure out the illegal scheme the corporation is running. The tourists get permission from the apes to visit the forbidden city, and as they hitch a ride on a transport car between the only two bases on the planet, they avoid an attack from the corporate killers and flee with the apes who are migrating north toward the forbidden city. The wife seems to be going native and the husband wonders if his obsession with viewing the city, sparked by a talk he saw when he was younger, is worth the cost.

The story uses multiple points of view shifting intrachapter (but with clear demarcations via heading–this is Toyon’s Journal, this is Alin’s journal, and so on), and it has a pretty slow buildup. The world is interesting and alien, but the reveals at the end are kinda blurted out by principals to the main characters, and then the climactic action takes place. It could have been handled better, but I was afraid the ending and the mysteries would disappoint me, but they did not–only the execution of the story did.

It really brings to the fore the theme of humans coming into a world and observing it for a limited time and how much of that world throughout the ages they might miss, creating a flawed understanding. A good theme for sure.

So give it a look if you get the chance to do so inexpensively.