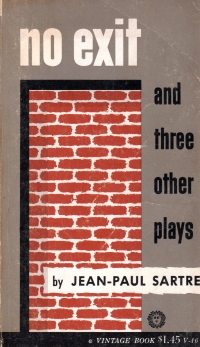 For those of you who don’t know, The Fall is about three people in Hell. Each of them is condemned for sins related to love, and their torment is to spend eternity with people who irritate them. It’s the source for the quote “Hell is–other people.” that American collegiate Existentialists banter amongst themselves.

The Flies is a retelling of the story of Orestes and Electra’s revenge upon their mother Clytemnestra for the killing of their father Agamemnon. In this retelling, the Orestes returns to Argos just before they ‘celebrate’ a holiday when the dead come back to remind the living of their crimes and slights against the departed. Orestes meets a disguised Zeus and then his sister, who has long hoped for her brother’s bloody return. When they meet, she does not think he’ll be the one to wreak vengeance, but he does and she has second thoughts. He kills his mother and stepfather, and the siblings hide out from the vengeance-seeking populace and Furies in Apollo’s temple, where Zeus appears to deal with them and to get them to return to his fold and to rule the people by casting off their freedom and doing his plan.

In Dirty Hands, a comrade imprisoned for killing the leader of a rival faction returns to his revolutionary compatriots to their chagrin, as he has proven to be unreliable. An old flame or crush of his secures his temporary safety while she tries to understand what went on with the assassination attempt and whether the fellow killed the charismatic and pragmatic leader for proper party reasons or in jealousy.

The Respectful Prostitute tells a short tale about a prostitute fresh in town who was the witness of the killing of a black man on a train by an respected citizen of the town and the member of a powerful family. The official story is supposed to involve the attempted rape of the young lady by two black men and her defense by the racist fellow, but she does not initially want to hew to that line and tries to resist various forms of persuasion to keep her story true.

They’re all pretty quick reads; the translations aren’t dated. Sartre’s work really draws out some of the Existentialist thoughts on freedom and what it means to be a person, and Sartre really subtlely leaves some questions for us to wonder about–particularly whether the wife of the main character in Dirty Hands got herself into a compromising position with the political figure to trigger her husband’s jealousy and compel him to complete his mission. Pretty good stuff, and reading it makes me feel deep.