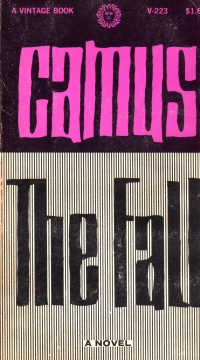 I picked up this book because it was sure to be more weighty than the other things I’ve been reading recently, and so it was.

The book is a short novel told in flashback by a reliable narrator. The first person narrator is a former Parisian lawyer who now haunts a bar called Mexico City in the red light district of Amsterdam. The narrator talks to a new visitor to the bar and, over the course of a number of nights and trips around Amsterdam, tells his story: He was a successful, had many mistresses, was respected, and demonstrated philanthropy until a single event called him to question himself, at which time he no longer felt the success he wanted to be and tried to show he was. He eventually ends up in this bar, telling his stories to try to knock other successful people off of their game as well.

Of course, the story told in flashback by an unreliable narrator makes it easy to dismiss his stories, but the book does illustrate a certain tension between a Dale Carnegie outlook and that of the Existentialist. That is, a Dale Carnegie self builds itself into greatness and might find happiness by striving to be better and experiencing setbacks, whereas the Existentialist might be going along all right until something triggers the Existentialism, the sense that the creation of the self is hypocrisy. I’m being a bit twee here, but I’m identifying two types of self-conscious personality types, people who think about who they want to be and either try to be it or do not. Of course, another personality type that is not so self-conscious exists and just does what it does, whether it’s Randian Triumph or Moochery or just people who go through their lives doing their things. Maybe I’m philosophizing a little glibly here and broadly talking about types of people who do not exist.

At any rate, it does show the defeatist Existential response to resistance in self-definition. Given the nature of the narrator, it’s not a ringing endorsement of this point of view, but it’s not an indictment of it, either. More of a description.

One can’t help compare this book to Jean-Paul Sartre’s Nausea; in that book, a historian eventually has his Existentialist trigger moment, but it’s just thought-based, whereas in The Fall, it is the narrator’s reaction to an event (or events) that triggers his pessimism. Ergo, it’s a much more approachable and true-to-life book. Of course, it’s been twenty years since I read Nausea, so I might be describing my experienced flavor of it instead of the book itself, so your mileage may vary.

At any rate, it’s a short little novel, as the Existentialists were wont, and it does give one some things to think about regarding consciousness, our self-images, and their relationships to the world. Which is never a bad thing, unless one goes the full Existentialist and starts feeling the need to compliment Sartre.