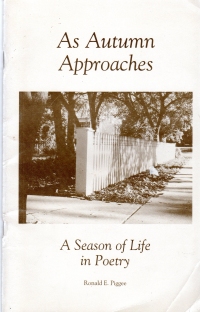 This book is a chapbook written by a Vietnam veteran, a black father in Nebraska in 1993. The poetry within ranges through a bunch of different styles, including free verse and at least one villanelle. It’s better than a lot of chapbooks I’ve read.

The book led me to some personal musings, though. In 1993, my father was two years away from dying from cancer; he was a Vietnam-era veteran who served in Okinawa instead of Vietnam (and I think he felt a little guilty about it). It’s hard for me to imagine him writing poetry, but that was not his way. He was a hands guy: his creative hobby of the time period was building elaborate ship models that required him to tie nautical knots in thread using a magnifying glass and tweezers.

Crazy that a book of poems about growing older would make me think about my father, how he didn’t grow older, and how I will not long be older than he ever was. Or maybe not so crazy, since that’s what poetry does. So consider that an endorsement of this book: It was definitely evocative.