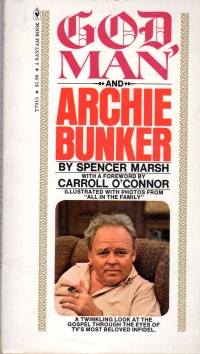 Why did I pick up this book? Because I’m old enough to remember who Archie Bunker was, and because I’ve taken to picking up slim mass market paperbacks to stick into my pockets when I might have a bit of time to read when I’m out and about and don’t want to spend it all on my smartphone.

This book is a small polemic written by a Presbyterian minister right as the television show All in the Family was coming into the fore. The minister sets up little chapters where he explains some about Archie, and why he’s a bad Christian whose beliefs and bombasm are not in line with the Christianity he sometimes tries to espouse. That’s about it. Here’s a chapter on Archie and the Bible, Archie and the Ten Commandments, Archie and the Prodigal Son, “The Good Edith”, and pretty much in each he leaps off from some incident in the show into a mini-sermon.

As an intersection between theology and pop-culture, it’s bound to be a little heavier on the latter, but it’s an unconvincing little book.

Funny thing about Archie Bunker. As I understand it, he was built to be the bad guy, but people related to him. He was a traditional, albeit crude and poorly spoken, member of the old generation that was out of touch with the modern, sixties person. But people related to his problems in understanding the changes going on in society and with those who would compel him to change. And somehow that gruff character carried a sitcom twelve seasons. Kind of like the modern day Ron Swanson of Parks and Recreation. Although this latter character was originally intended to be a foil for the star’s character, he was a man’s man Libertarian, and he’s the one from whom Internet memes are made. Because people even in the twenty-first century relate. And the sitcom writers and producers are shocked by what sells. Because they’re professionals or something.