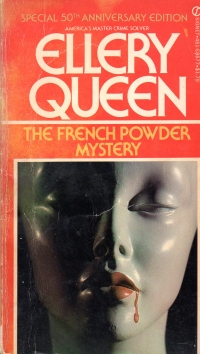 The copy of this book that I own is the 50th Anniversary Edition. Ponder that for a moment. This is the second Ellery Queen novel, and it dates from 1930. The mass market paperback I have is from 1980. Ellery Queen (the original duo) wrote a bunch, and his name appeared on other books and short stories as well as other media and a mystery magazine, to the extent that his works were still in print for fifty years. Also, do the arithematic, and discover that the fiftieth anniversary edition was thirty-four years ago. Man, we’re old, you and I.

At any rate, this book revolves around a murder in a New York Department Store, the kind that only New York city has or had. The wife of the owner of the department store is found dead in a furniture display one morning, and Ellery Queen and his father have to puzzle out why she was killed and why her body was hidden in such a fashion as to delay discovery until a certain time. Signs point to the woman’s missing daughter, who is probably a heroin addict. And Inspector Queen has to tackle a heroin ring and a new Police Commissioner.

The book has a locked room feeling that other Queen books (as I recall) do not, so it was pretty dry going, and the whole thing a bit gimmicky to fit into the locked room subgenre as much as it does. But it’s early in Queen’s writing career, and he got better. Or I was more patient with these books when I was reading them in great detail in the 1980s.

Coming soon, I shall drop French phrases into my conversation, and I’ll make sure they sound italicised.

Overall: The book’s not the best of Queen if I remember correctly. Good enough if you’re into the locked room stuff, but I’ve moved away from it. Not bad enough to make me swear off Queen stories. I’ve looking through the archives here, and I don’t have any book reports for Queen novels. Has it been ten years since I read another? It probably won’t be another ten years.