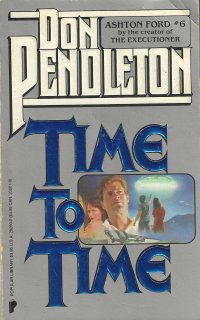 Well, make this my year of completing sets, or at least groups of books that I have. I mean, I finished all of the books in the Executioner series that I own; I finished the set of James Blish Star Trek books I had on my to-read shelves; I finished the Doubleday children’s books I’d picked up, perhaps for my children but never shared with them. Since I only had three books in the six-book Ashton Ford series, why not?

Okay, so I did not know what to expect when I read the first in the series, Ashes to Ashes, in 2018. And when I read Life to Life in October, I thought maybe the series had an arc it was completing–after all, in it, Ashton impregnated a televangelist while she was in jail and they were getting it on in the astral plane, so I expected something to come of that. Maybe in the fifth book, but not here.

In this book, Ashton follows an unidentified flying object into the hills above town and discovers a nude woman. It’s an acquaintance of his, an actress of some reknown, and he helps her. He discovers that she’s involved with what might be some extraterrestrials and might be an alien.

So basically, that’s the schtick of the books: a pedestrian suspense plot with an overlay of woo-woo. In this case, it’s an alien civilization advanced of ours, monitoring ours and hoping to have us rejoin them in the future, but right now, it’s dolphins (the original heirs to this world), rebirth, and UFOs.

We get pages of Ashton thinking these things through again. Whereas Mack Bolan sometimes would go a couple of paragraphs or a page or so into philospophy or morals; however, in these books, Pendleton gives Ashton a lot of room to muse on the paranormal, and it detracts from the mundane plot or even the woo-woo.

You know, when reading these books, I cannot help compare them to the later Heinlein, where he turned toward free love and whatnot. Both Pendleton and Heinlein were Navy men in World War II, and their books took a different tone when they got older and as they faced their own mortality. I should like to say my books might take a similar turn, but I don’t have a body of work from my youth the mark any differences as I age.

At any rate, I can understand why this series did not go very far. It’s a little wordy, and Pendleton does not balance or blend the woo-woo with the normal plots very smoothly. But perhaps he pioneered the way, a bit, for modern urban fantasy. He certainly didn’t hinder it.