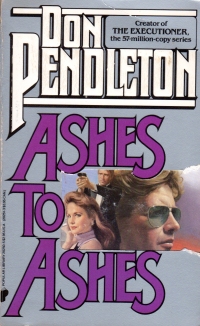 I bought this book at Half Price books here in Springfield, Missouri, (not the one in Kansas) earlier this year, but apparently I did not mention it in a blog post. I do that, sometimes, when I only buy a book or two at a stop. Like last Saturday, when I stopped in ABC Books and bought a single title (Hagakure: The Book of the Samaurai by Yamamoto Tsunetomo). So allow me to explain that I bought two books in the Ashton Ford series by Don Pendleton, the creator of the Executioner/Mack Bolan series. This is the first book; I think I also got the third book in the series. Research (reading Wikipedia) indicates there are six in total.

The protagonist is a former Navy officer with some psychic gifts who helps people. In this book, he is approached by a young woman looking for a sex surrogate to give her the big O to overcome her hang-ups, so she comes to Ashton Ford because of his new agey reputation. He takes her home for protection when her body guard is found dead, but armed men take her from his apartment. He goes to her home, a compound in Bel Air with tight security and a bunch of people coming to party. Ford finds his name on the guest list, and he discovers the girl is actually an heiress to her grandfather’s fortune, and that her parents died under suspicious circumstances shortly thereafter. The trustee of the estate tries to put Ford under a very restrictive but very lucrative contract, the drunken wife of the trustee tries to seduce Ford and utters cryptic remarks, and people start dying–and the girl herself appears to be greatly unbalanced.

So it’s a Rich Family With Secrets In Crisis kind of plot line, with a new agey fantasy twist to it.

I didn’t like the book as well as, say, the Copp series (Copp For Hire and Copp On Fire, both of which I read–eight years ago? That long? The blog does not lie.). Pendleton still does the paragraphs and pages of exposition bit, although where in the Executioner books, he would go on about honor and civilization, here he goes on about metaphysics, the mind/soul, and other new agey phenomena. I mean, it’s his style, yeah, as is interjecting “, yeah” into the prose. But the topic of the exposition resonates less with me, which means that the expositions seem longer and more dissonant.

That said, it’s still better than many of the paperback originals out there (John D. MacDonald excluded, of course), and it’s better than any post-Pendleton Bolan title. So I’m likely to pick up the other Ashton Ford book I have here soon, and will pick up others in the series when I get the chance.