Out of the mud two strangers came
And caught me splitting wood in the yard,
And one of them put me off my aim
By hailing cheerily “Hit them hard!”
I knew pretty well why he had dropped behind
And let the other go on a way.
I knew pretty well what he had in mind:
He wanted to take my job for pay.

Good blocks of oak it was I split,
As large around as the chopping block;
And every piece I squarely hit
Fell splinterless as a cloven rock.
The blows that a life of self-control
Spares to strike for the common good,
That day, giving a loose my soul,
I spent on the unimportant wood.

Not the complete poem; That’s the first two stanzas. Gentle reader, you would most likely know it from its closing lines:

Only where love and need are one,
And the work is play for mortal stakes,
Is the deed ever really done
For Heaven and the future’s sakes.

As you know, gentle reader, that is the source of the title of Robert B. Parker’s Mortal Stakes, back in the old days when his writing was deep and rich. Or, if not deep and rich, before he went Hollywood and his prose got thin.

So how, exactly, am I living it?

The power company, which used to trim trees near the power lines, sent its arborists out with a new dictate: Any tree within 15′ of the road, which is the easement or right away, must be cut down. As Nogglestead is but sparsely spruced, with only a couple of trees aside from our windbreak on the southwest cornet of the property, it only mean one tree. However, it was a tall, middle-aged oak at the end of our driveway.

As we’re coming into firewood season, I asked them to leave the trunk and whatnot for me to cut up for firewood. So they did. 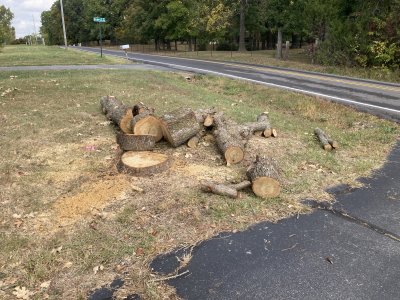 A couple years back, when another tree had fallen on our electric drop and power company arborists left behind the trunk of that tree cut into segments, I bought a small gas-powered chainsaw to cut that wood down for the fireplace as splitting it with a hammer and wedges was not going so well on the green wood.

But as you know, small engines (not to mention larger ones) are a particular bane of mine–I have trouble getting them started, maintained, and/or repaired (don’t ask about the tiller). So I asked a handyman at church for an estimate using the picture above.

Gentle reader, a cord of firewood here in the Ozarks is still under $400 delivered (I am sure, as I have three cords to stack this weekend). So $300 to cut this up, which will ultimately lead to less than a rick of wood, sounded exorbitant.

I was reluctant to fire up my chainsaw because little two-stroke engines like the ones you find on a chainsaw use an oil/gas mixture. Given how little I use the gas chainsaw, this meant buying a gallon of gas and a little container of oil as well as a gallon gas can for the mixture, and the last half can has been sitting on a shelf for three years. I will have to remember to take it to my automotive shop to have them dispose of it. I was reluctant to spend repeat that process with another can, another gallon of gas, and another half little bottle of oil.

So I demurred and went to the hardware store, and I bought a battery powered chain saw for about $300. I know, I know, but it would leave me with a chainsaw that I would be able to pick up and run without worrying the engine or the gas.

And I got to work.

So I spent several days cutting for an hour each day over the course of three or four hours. Then, I spilled some bar and chain oil, which led to dust sticking and the chain slipping and a hella mess that I have yet to clean up.

Instead, I bought a gas can, a little bottle of oil, and a gallon of gas, and in a Christmas miracle, my gas chainsaw started right up. So I got more of it cut, but stopped when I ran out of gas in the chainsaw about a week ago.

Now that the sun is setting earlier, and I have been traveling on weekends to watch band festivals, so I still have a couple more hours’ work to do, probably this weekend (for some reason, today has felt like a Friday, so I have been thinking I would do it tomorrow).

But in the end, it will have cost me more than $300 in money and a whole lot more in time, but I still feel good about my decision. After all, I will have done it for myself, and as Frost attests, that’s fulfilling (although I am not sure I am actually wedding vocation with avocation).

4 thoughts on “Brian J. Lives Out The Robert Frost Poem”