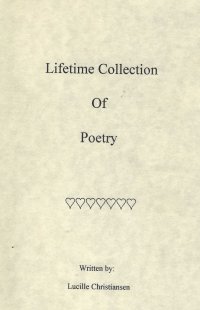 This book bears no copyright date, but some of the poems that are dated come from the late 1960s–and the first is dated 1937 and says it’s the poet’s first poem. So we can assume this is from the 1970s or 1980s–maybe even a little later given that the collection has wingdings between poems that might come from the birth of desktop publishing. Remember, younger readers, desktop publishing referred to being able to lay out your books on your desktop computer for printing, not blogging or e-zines where the work never actually leaves the desktop (which these days includes mobile devices).

The author was a teacher, and perhaps an English teacher, as the poems come in a variety of forms and styles, so it’s clear she liked to noodle with words a bit. The quality varies from simple to some that are actually halfway decent. So it’s a bit of grandmother poetry with a little dash of the cool teacher who might have inspired you to write. Strangely enough, I can’t think of anything in my middle school or high school career where English teachers actually wrote, and my college mentor, such as he was, has published only three or four books in his career.