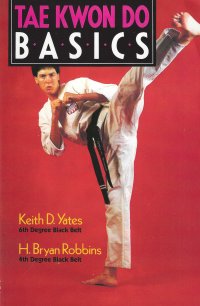 I bought this book last Saturday, and it would have been a good bet to guess it would be one of the first that I read.

It helps that this book, like so many from the era, was written for children who were getting into martial arts in what must have been a post-Karate Kid boom–so many of the books I see are from the 1980s or now with fewer selections in between. And it really is the basics, designed as something you can review at home after having seen the things in class (and many of the chapters indicate your instructor will likely show you more examples).

So it’s a book that shows basic moves and basic forms with black and white photos for starting positions and ending positions, but unfortunately, that does not capture the flow in any of them. So if you’re thinking you’re going to learn the actual moves from a book, you’re mistaken–as I was in the 80s, when I checked out at least one book from the library about karate. But it’s like learning a language–you have to do more than read a dictionary (which I’ve also done, trying to learn foreign languages from dictionaries before I understood verb tenses and whatnot).

Still, for me, it’s a nice refresher. And I note, again, that the sparring stance for tae kwon do is a more guarded, hide-behind-the-lead-shoulder posture than the one my school teaches. Which makes me want to ask the kyoshi where he got the stance preference.