On Saturday, after spending an hour in a parking lot helping my oldest master the basics of parallel parking, I had him drive me a half hour to ABC Books and a half hour back to help fill his log book before his driver’s license testing. Also, Mrs. E. had posted about a book signing. 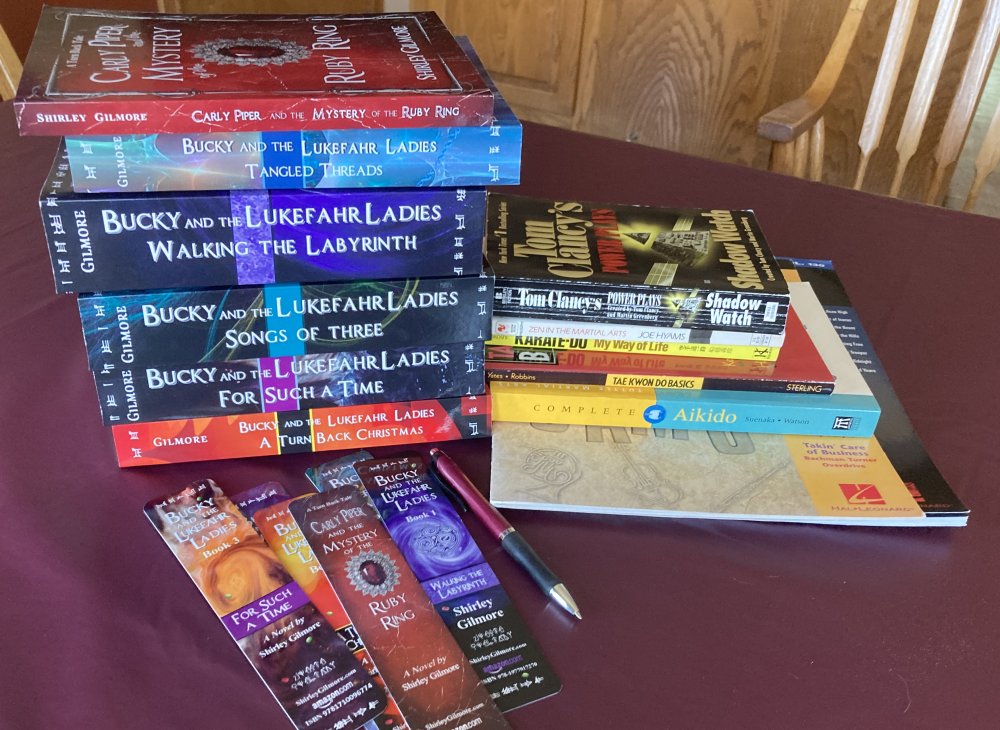 The author signing her books, Shirley Gilmore, is a local to Springfield but who taught in southeast Missouri for 25 years. Her books are set in a fictional town there called Turn Back and feature a ten-year-old girl, Bucky, who moves there with her father from New York City and things happen as they so often do. She has five books in the series and a related one-off, and of course I bought them all. Her books include:

The main characters are Bucky and a group of Sunday school teachers she befriends. Boy, howdy, the first book is 680 pages. I would have some work cut out for me were I to try to get to A Turn Back Christmas as my Christmas novel this year.

I also noted that Mrs. E. topped up her martial arts section for me. I also got:

Just down the aisle from the martial arts books, I pawed through the music milk crates as I recently discovered I have no books on bass guitar (and I have a bass guitar again). So I picked up two books, Rock Jams and Iron Maiden: Play 8 Songs with Tab and Sound-Alike Audio; a closer look now that I’ve gotten home shows that Rock Jams was misfiled with the guitar books. Ah, well, I guess I will put that upstairs for the trumpet players of Nogglestead.

I did not empty out the martial arts section; I only took about a third. Because there’s another book signing next weekend, and I am being kind enough to give the other ABC Books martial arts book buyers a thin chance at picking them up. Mrs. E. said the others have not been in in a while. I grant them this one chance.

At any rate, the number on the photograph is 195. Hard to imagine that I’ve posted about bulk book buying 195 times, but the sagging and overstuffed bookshelves of Nogglestead indicate this is so.