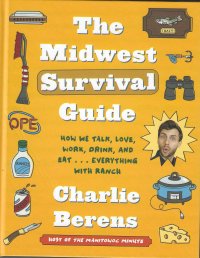 As you know, gentle reader, I’m a bit of a fan of his for years (ah, jeez, I posted his video “Midwest Horror Film in October 2020). So when we saw (well, my oldest saw) this book in Baraboo, I had to have it. So we do. I have read it, but he has not yet.

It’s a large hardback running about 288 pages (including acknowledgements and credits) with a fair amount of imagery, photographs, tables, charts, and wingdings with chapters on The Basics, The Language, The People, The Setting, The Driving, Food & Drink, and so on. If you have seen any of his videos on YouTube, you’ve got the flavor of the humor.

Still, it works a little better in the short, three-minute videos than in a three hundred page book. I started it whilst on my vacation in Wisconsin, and I read about half of it, but I set it aside for a while to freshen it up a bit in the second reading. I had a couple quibbles with the book, first and foremost a certain love for Chicago that I assure you proper Wisconsinites do not have. Anyone from Wisconsin who expresses this desire to go to Chicago or any place in Illinois for that matter is suspect–but let us remember that Berens himself moved elsewhere and won an Emmy as a newscaster before returning home to be a Wisconsin-schtick comedian. Also, the book pays a little to self-consciously to recognizes native Americans, women, and other groups who might not have gotten a lot of recognition in the past, but now get all the recognition that’s handed out. Still, it’s only sprinkled in, but if you’re sensitive to the themes, as apparently I am in the 21st century, then you’ll spot it. But it’s just a little bit and not hectoring or particularly off-putting.

I only put a couple of flags in the book, all in the college section. First, my alma whattamattayou is not listed in the intro paragraph as an example of a midwestern university. Second, the book mentions Carleton College in Minnesota, and I remember that college was one of the first to send me brochures, which I liked to look at, but I was committed to going to my alma moneyforadecade since I was 10 years old–but I do wonder how my life might have been different if I had truly gone away to college (as I lived with my father, I was technically a commuter and more a resident of Milwaukee than a student bound to the university), and the last is a mention of Southern Illinois University, which threw me a bit–I did not realize that Southern Illinois University-Carbondale was technically “SIU”–I always thought of it with the town appended, but that’s because I’m a big fan of SIUE, which is Edwardsville, closer to St. Louis and home of the sound.

So a book amusing in spots, probably a bit long. Worth it at a book sale, although I’m not sure it’s worth $27. But I am a bit of a cheapskate when it comes to books. But I’ll keep an eye out for more from Berens, on YouTube and at book sales.