This is the last photo of Foot, short for Underfoot. His chip name was Mercury, changed from the original Zeus, and Mercury fit him a bit better, but Underfoot fit him the best.

You might remember him from posts like this, this, this, and this, where he identified as a chonker: 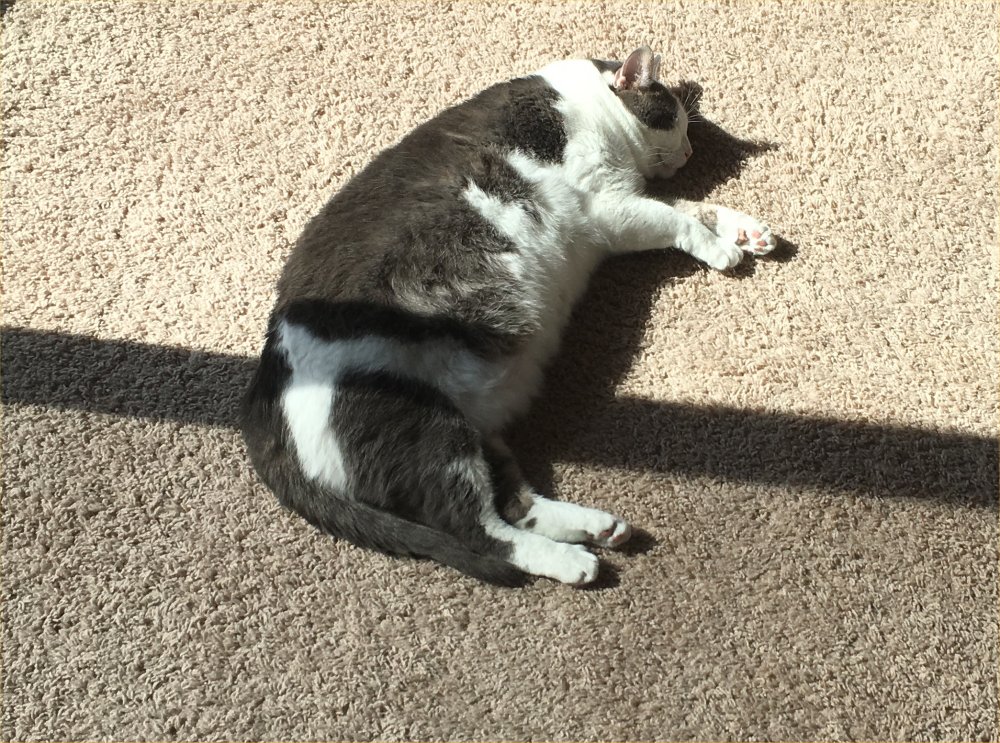 A couple of months ago, we realized that he was getting a little more svelte, so my beautiful wife ran him into the vet’s office, where the new veterinarian there very matter-of-factly said he had terminal feline leukemia, and he did not have very much time left.

Well, that time ran out yesterday.

He’d been in decline for a long time; in the last couple of weeks, he’s been less mobile. We were afraid he would pass when we were on vacation–these vacation fears are not without precedent; we boarded Aurora when we traveled a long time ago, and I took calls on my cell phone at the happiest place on Earth regarding her emergency care, although Aurora bounced back, not a big bounce, but she lived for some time. Since we’ve been back, though, Foot had not been moving around much at all. He slept in our closet by day, and then he would come out in the afternoon to lie in the sun in door windows in the bedroom or in the living room. But he rarely came downstairs to eat or drink, and even when proffered meat just nibbled.

On Tuesday night, he made a rare foray downstairs; I was reading a book to be reported on later. He had been walking crookedly, a bit, but this time his rear was lower than the front. I’m not sure how long it had been since he’d eaten, although he was very fond in the last week of licking up water from the walk-in shower. He looked up at my wife in her recliner and tilted his head a couple of times like assessing the jump and not liking his chances. So I picked him up and let him nestle in with his mama for a time.

Wednesday morning, he was not to be found. He’d discovered a good place to hide in the walk-in closet, where he’d been hiding mostly, although he would pop up between my legs when I was urinating or he would walk into the shower after I finished and left the door open for his convenience. So I called it. I said we should make his appointment, and we did, for yesterday afternoon. When he appeared, my wife took him onto her lap for most of the morning. When the appointment’s time came, I took him offer her lap so she could change, and I put him in the sun beside the back living room door for a few minutes. The place where he’d spent so much time in the years past. And then we took him in, and that’s a story I cannot recount in words.

Ah, but enough of the maudlin. What will I remember of Foot?

I didn’t sleep well Wednesday night, thinking about tempus fugit and my newest Latin phrase, Optima dies….prima fugit (the best days are the first to pass).

The house is a little emptier, but not as much as he had died suddenly. He will be missed, however.

1 thought on “One More Moment In The Sun”