On May 28, I posted The Jazzy Pajamas of Nogglestead and mentioned KHTR, which was Top 40 radio in St. Louis until it switched over to oldies one night. I mean, we went to bed listening to the radio on Sunday, and on Monday morning we awakened to oldies. I thought it was a gag or something on the morning show. Oh, but no. I am pretty sure that the oldies station is gone–I see on an Internet search that it’s now like all the other radio stations that play 70s, 80s, 90s, and now–omitting, apparently, 20 years of crap, although today’s music is tomorrow’s crap.

But Facebook showed me a photo from a group or page it thinks I might be interested in, and it’s the KHTR top hits report, presumably printed in the Post-Dispatch, although the Globe-Democrat was still wheezing along in 1984: 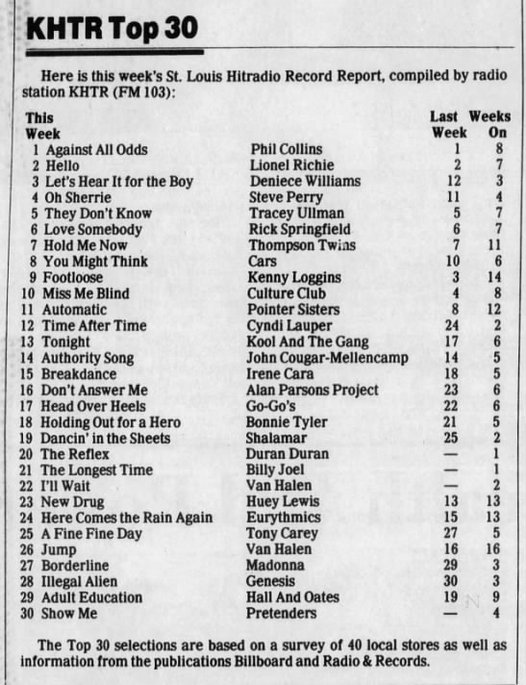 I can actually still recollect most of those songs. The ones I do not remember are:

Of course, if I heard them, I might remember them. It helps that the local 70s, 80s, 90s, and now stations are replaying the hit countdown programs from the 1980s. No fooling; although I did not hear Casey Kasem within the last week (the Springfield station shifted American Top 40 to Sunday evenings instead of Sundays returning from church time), we did hear both Shadoe Stevens and Rick Dees replayed at different times on our trip to and from Wisconsin.

The list includes, what, four songs from the Footloose soundtrack (yes).

Also, Tracey Ullman would later be known as the comedy sketch show where the Simpsons first appeared. And then forgotten.