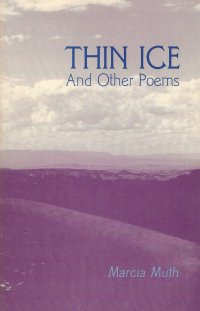 I bought this book in April at the Friends of the Springfield-Greene County Library book sale. In the past, they have bundled chapbooks up five or ten for a buck; however, this year, they did not, so I paid a whole dollar for this book. I picked it up last week when I was not falling asleep quickly enough, and I thought a quick chapbook might take my mind of the troubles my mind invents at eleven o’clock.

So, this book has a copyright date of 1981 but a signature block from 1986, which meant that she was peddling these at least five years after publishing them. The back notes that she has also published another collection of poetry, a book on painting and selling art (specifically kachinas, the native spirit beings in Pueblo cultures), and a book on how to write and sell poetry, fiction, plays, and local history. So she was a pro and no grandma writing poetry, although she might have been a grandmother (although none of the poems really mentions children).

But, about the poetry: Meh. I mean, it’s got some of that look at the poem feel that dominates so much modern art. Self-consciousness that says, this, the poem, is what is meaningful–not that the poem, or the art, wants to draw attention to some meaning beyond itself.

I ask questions.
You smile
Shake your head.
“Thin ice,” you say
Silence rests
A wall between us.

That’s it. Most of the poems fall within those line lengths, although some are a couple of lines longer. Some of them have repeating motifs, such as the Gypsy king or referring to the kiva, but mostly they read like the work of someone who felt compelled to write poems every day because one is a poet. Although, to be honest, reading through the complete works of any poet like Keats, Shelley, or maybe even Frost (probably not), one gets a lot of clunkers.

At any rate, I did come away with a couple of new words (kiva, a sacred place for Pueblo Indian rituals, and kachina, a Pueblo Indian spirit–the author does live in New Mexico, you must know, and if you don’t you might miss some of the references). But overall, not impressed.