Today, I took a trip to the north side of Springfield for the Friends of the Springfield-Greene County library book sale, ostensibly to look at the dollar records, but I also picked up a few books and videos from the dollar books section. As I was already up in that area, I also stopped at ABC Books to pick up gift cards for thank-you notes for teachers, but I picked up a couple books there–and told an employee, the son of friends, that he should go door-to-door looking for books for the martial arts section.

Although I hope to return tomorrow to visit the Better Books section and prowl amidst the art monographs and audio courses, I might not make it back–consider this a cliffhanger! And if I do, ABC Books is hosting another book signing with S.V. Farnsworth, so I might swing by there again–as you might remember, gentle reader, I missed Farnsworth when she was at ABC Books last December. 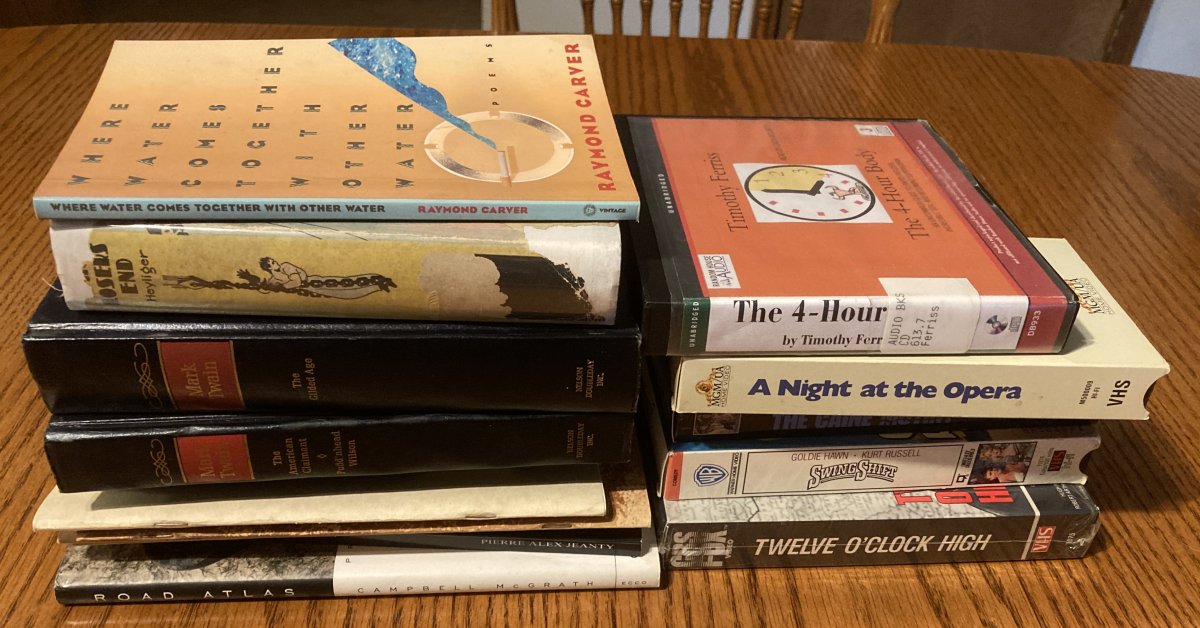 The Friends book sale did not bundle several chapbooks for a dollar as in years past; I had to pay full price for each. Still, I only spent a combined $35 on all media at the book sale along with $20-something at ABC Books. Almost frugal.

Although tomorrow is half-price day. I might be able to convince my wife to come along to help me carry, and it might be in the Better Book section where I go nuts.

It was strange, too–so many times, I have dragged my boys up there with the promise of a Five Guys burger after, and I have had to hustle before they went into full boredom revolt. Today, though, I did not have them, and I was in and out in under an hour. Part of that, I suspect, is the paucity of records to paw through–less than a third of what it has been some years–and that I really only look at the media and the poetry sections in the dollar book section. Also, I wanted to hurry home as I have other things to do. Like this blog post.