So yesterday, I had a couple of hours whilst my son was at an event in Republic, Missouri, so I thought I would do some Christmas shopping. My first stop took me to Mike’s Unique, where I bought some records. The second stop was at ABC Books, where a local radio personality, Marla Lucas, was signing her book.

I did my circuit, although I stopped by the local authors and science fiction authors books to see if I could find something for my nephew.

I found some things for me, certainly. 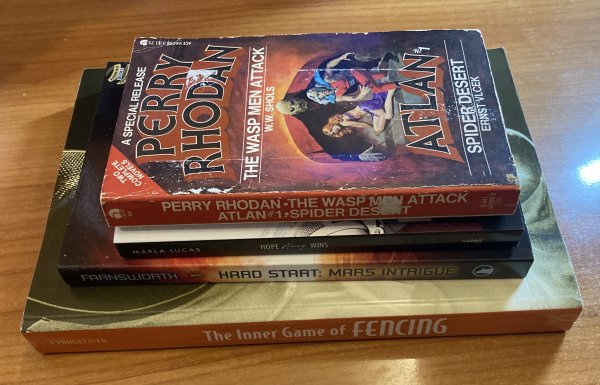 I also got my nephew a copy of Gateway by Frederik Pohl that I enjoyed…in 2013? That’s can’t be right. I just read that, and my beautiful wife got me the others in the series, which I have not yet read, that Christmas.

At any rate, the ratio of Christmas gifts at this stop was 2/4, so I’m getting better. Unfortunately, after running all the way to the north side of town after my stop at the antique mall, I really did not have time to stop anywhere else except to pick up a couple of gift cards for the stockings. So I might have do something like this again next weekend.