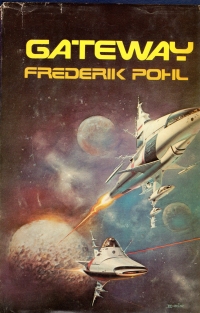 Apparently, I am trending science fiction this year, as this book is the second by Pohl I have read this autumn interspersed with some Philip K. Dick and whatnot. I must feel like I need an escape from the real world and crime.

This book revolves around an ancient alien artifact, an outpost on an asteroid off of the solar system elliptical that has about a thousand alien ships with autopilot programmed into them. Man has not yet figured much about these ships; only that they seem programmed to return to the asteroid, called Gateway by man, and they have a lander. So volunteers risk their lives hoping to strike it rich with discoveries at the ships’ destinations, even though many of them do not return from the journeys.

The book focuses on one fellow who won a lottery on earth and bought a ticket to Gateway. Once there, though, he forestalled his eventual trip until he was running out of money.

The narrative is twin-pronged: one timeline is his experience on Gateway, and the second is the future of his trip to Gateway, when he is fabulously wealthy but is seeing an analyst. It turns out something traumatic happened, and he eventually comes to terms with it as it is revealed in the earlier timeline.

I didn’t see where it was going; I thought it would have a more epic resolution, but a lot of these early science fiction stories described big changes to individuals, but not epic wins at the end. So I was pleased that the book did not resolve as I thought, and I think it resolved better than Black Star Rising. The story is also spaced out, filled out, by advertisements, reports, news articles, and other sidebar material that adds to the whole conceit.

As I researched this book report, I learned that this is part of a series that Pohl continued. I’ll keep my eyes open for other titles in the series, as I’m interested in learning what happens to some of the characters after this book ends. So let THAT be my final rating on it.