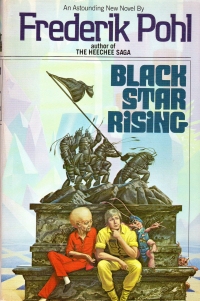 In my grim tour of the recently deceased (starting with Elmore Leonard), of course I would pick up a book by Frederick Pohl since he passed away earlier this month. This book isn’t the first of Pohl’s work I’ve read, though. I’ve even reported on Man Plus eight years ago.

This book is set in the future about a hundred years. After a nuclear exchange has wiped most of the Soviet Union and the United States out, China and India have split what remains of the world. The former United States are now republics and collectives in the Chinese mold. One young man, denied the opportunity to study at the University, is a farm laborer until he finds a part of a murder victim in his rice paddy. This red herring puts him into contact with an attractive Han police inspector, and his testimony at the trial brings him into contact with a surgically schizophrenified professor at the University and in the know about the alien ship approaching Earth and asking to speak to the President of the United States. Faster than you can say “Jack Ryan,” the lad is the president for presentation sake and he’s on his way out into space to meet the visitors….

You know, I could go on, and I have when recounting it for my beautiful wife who thinks it sounds interesting enough that she might read it. And she doesn’t tend to science fiction.

It ends a bit abruptly, but it goes in such directions. It builds the world, and then things happen to shake that all up, and…. Well, it reminds me (again) how untethered (in a good way) science fiction from those years could be. Almost anything could happen. I haven’t read much contemporary sci fi, but I get the sense that it falls neatly into subgenres–Military sci-fi, urban fantasy, fantasy, and whatnot–that makes it less wonderful and imaginary.

Of course, I’ll drop back into my paperback suspense fiction, but once in a while, science fiction is good to make me just wonder.