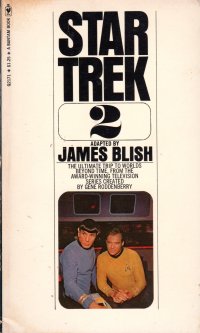 I picked up the first book in this series for the 2022 Winter Reading Challenge, and once I abandoned that effort (although I got eight of fifteen categories this year, which is not as good as last year, so I still get the undersized coffee cup), I decided to start running through some of the book sets I have. And, as I mentioned, I have a bunch of these books, short storizations of the Star Trek episodes as well as the Alan Dean Foster short storifications of Star Trek: The Animated Series. Sorry to bore you regular readers with the repeatings of the minutiae, but some people might someday hit this from a search and not have the proper context. Not that I’m providing that; what I am providing is a bunch of links for myself in the future when I re-read posts so I can click about in my own past. Thanks for joining me on that journey today, which, as I mentioned, is already the past.

Sorry, where was I? Oh, yes, Star Trek 2. Originally published in 1968, this is the 19th printing in 1975. Apparently, they were selling. Enough that a decade later, they’d make another television series and even launch a television network based on it. Remember those little television networks like Fox, Paramount, and what was that other one, CW? They had cutesy names and foreshadowed a bit the streaming services of today (tomorrow’s yesterday).

At any rate, this book includes:

As with the other books, this one has some anachronisms and variations from the mythos.

Out of Date Right After Publication

In “Tomorrow Is Yesterday”, history does not align with the story:

Uhuru flicked a tumbler and the loudspeaker on her board burst out: “…five-thirty news summary. Cape Kennedy–the first manned moon shot is scheduled for Wednesday, six A.M., Eastern Standard Time, All three astronauts set to make this historic flight are…”

Kirk was up out of his chair on the instant. “The first manned moon shot!” he said. “You’ve got some sort of dramatization. That shot was back in the 1970s.”

As we know, in our timeline, this was the late 1960s. But Blish would not have known that a year before Neil Armstrong stepped out of his capsule.

The Klingons were hard-faced, hard-muscled men, originally of Oriental stock.

Ackshually, they are an alien race altogether.

Where Have I Heard That Before

“Fascinating,” Spock said. “Pure thought–or pure energy? In any event, totally incorporeal. Not life as we know it at all.”

Where have I heard that? Oh, yeah.

The episode is “Errand of Mercy” should it come up in a trivia night. Not that it would; the 1960s and even the 1980s are too far in the past for trivia night questions these days.

He made a full report to the portmaster, Senior Captain Stone, a craggy Negro who had once been a flight officer himself.

Nothing is more anachronistic in books from the 20th century as how to describe a person with black skin.

Along with calling Vulcans Vulcanians (as happened in the first book in the series), we get something just a touch off:

“Never mind the logical holes,” Kirk said. “Mr. Sulu, lay in a course for Deneva. Warp factor four. Lieutenant Uhuru, tell Starship Command where we’re going and why. When we break into the Denevan system, raise the planet.”

This was standardized to Starfleet Command, but perhaps not in the treatment or script Blish was working from.

A Difference in the Filmed Version?

In “The Space Seed”, the disposal of Khan’s ship is in question.

“Yes, Captain. What should I do with the Botany Bay?”

“Hmmm… You’d better dump it into–no, on second thought, let’s keep it in tow. I suppose there are still things aboard her that the historians will want to see. At the moment, though, whenever I say ‘historian,’ I have to repress a shudder.”

Maybe this was changed at the last minute in filming, or maybe there was a continuity error, but the Botany Bay landed on Tau Ceti V, as we see from the historical documentation.

Still, with its anachronisms and variances, a quick and entertaining read, especially if you’re of a certain age and a fan of the original series.