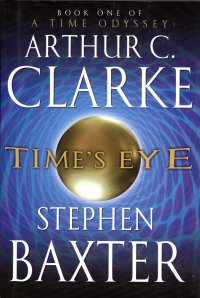 At any rate, it’s an Arthur C. Clarke book. You know, he’s considered one of the big three with Asimov and Heinlein, but in the years since someone made that judgment, he’s really tailed off, ainna? He had, what, Rendezvous with Rama, Childhood’s End, and 2001: A Space Odyssey followed by a bunch of sequels for each. Except, of course, with the one with end right in the title. Perhaps his short stories were something else, but barring that, I would not put him in Asimov or Heinlein’s class. Maybe the people who put him in the big three were his publicists.

This book, the first in a series called A Time Odyssey, has the premise that a couple of groups of mid-21st century people find themselves removed from their time and placed somewhere/somewhen else. A UN Peacekeeping reconnaissance helicopter is shot down and manages to crash in Afghanistan near a 1890s-era British fort. Just over the horizon, scouts find an army–Macedonians led by Alexander. Three astronauts returning to earth from the International Space Station arrive in the same time period in Mongolia–where Ghengis Khan’s army has found itself also. A member of the missing link species is captured with her daughter near the fort; and amid all the disruption, one of the helicopter officers’ phone calculates based on the position of the stars that they’re in the 13th century. The descending astronauts did not detect many signs of human life or activity aside from themselves. Oh, and alien orbs, impossibly perfect spheres, float above the landscape in various places.

So we’ve essentially got a book that throws a game of Civilization into a blender with tropes from Clarke’s other works (an ape, elevated; a computer that asks if it will dream when it’s shut down; an advanced civilization’s artifacts) and maybe some other works (Under the Dome, although that book came out five years after this one) to make a readable book that leaves one saying, “What’s it all about?” The groups and armies come together in a great battle at Babylon, where the biggest of the alien artifacts resides. And after that climactic battle, we get sixty pages of denouement that leads to…. What? The next book? One of the protagonists is returned to her own time, only to find one of the alien artifacts there.

You know, I read the Wikipedia entries for this series to see where it goes, and it goes like an Arthur C. Clarke series does. A conceit, readability, and then it’s an alien reveal that doesn’t lead to a triumph or resolution for man, but rather a big conceit. Meh. I prefer space opera, thanks.

So I checked off a book, and I have revisited Clarke and find my opinion of him has not changed since I read 2001: A Space Odyssey in 2007. I still haven’t gotten to that series’ sequels yet, and they’re on the outside edge of the to-read shelves in my office. Maybe next year since I’m finding myself in a mood to clear some of these old books out (which will last one or more of these old books or until my next trip to ABC Books).

But the first entry in the 2022 Winter Reading Challenge is complete.