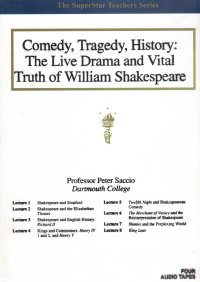 This is an old timey Great Courses/Teaching Company set of cassettes. The copyright date says 1996, but the instructor at one point talks about the 1980s as being the present time, so it might have been recorded a couple of years before the copyright date. The lectures feature a live audience, so people laugh at his jokes and you can hear them shift from time to time–and one can expect that it’s actually them applauding at the end of each lecture–a sound effect that the company has kept throughout even though you cannot hear the audience otherwise or see them on the few DVDs I have watched.

It was a pretty short course–four or five hours–and the professor goes not only into Shakespeare in his time for context, but then delves into eight plays to provide some comment on them, their genres, and their interpretations over time.

For example, he talks about the Shylock question. As you might know, gentle reader, Shylock was a Jewish character in The Merchant of Venice, and the play apparently contains some stereotypes of Jews (that carry forward to this day). The professor talks about how the interpretation has changed over time to present a more sympathetic portrayal of the character, and the professor remarked that at least one performance he saw stripped some of the Jewishness from the character–and that plays in the 19th century were Bowlderized to remove the sex jokes, but in the late 20th century they were getting chopped up to remove other objectionable content. Brother, have I got news for you from the future.

At any rate, I really enjoyed these audiocassettes. If you’ve been here for some time, you might remember that I started reading the complete works of Shakespeare in 2018, and I got about five plays in before laying the book aside. See my category Shakespeare for my current progress on reading the book. If it has more than five entries, know that I have been inspired by this lecture series to pick it back up. I will have to pace the plays out like Executioner novels to ensure that I don’t get tired of them and see the formulaic parts too clearly. Perhaps 2022 will be a year of drama, as I have Volume 2 of the complete works of Ben Jonson, a contemporary of Shakespeare, around here somewhere (the first volume comprised the reading of my college course on Ben Jonson back in the early 1990s).