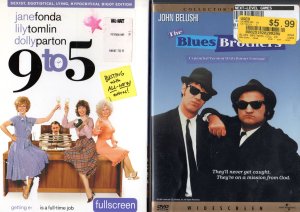 You know, these films were released in the same year. It’s crazy, because the aesthetics of each differ so wildly.

The Blues Brothers self-consciously represents a bit of a throwback, a bit purposely so. I’ve heard the story that the producers wanted the film to include more contemporary, disco musicians in it, but Dan Ackroyd and the dead Belushi wanted to have old Motown musicians. By 1980, Aretha Franklin, James Brown, John Lee Hooker, and Ray Charles were past their pop-culture sell by dates, apparently. I don’t know what to think of this–there’s an uncanny valley between first popular appeal of some artists, followed by a lull, and then perhaps another ascent into the zeitgeist that some artists enjoy. Kind of how artists have a “comeback” album two or three years after a hit album. Elvis, for example, did his big comeback special in 1968, not far past his film successes. But I digress.

When I read the novelization earlier this year, I recounted the plot for those who didn’t know it. I will spare you the rehashing of the rehashing here, I’ll just do a little comment on the aesthetic, a la Lileks, but without the screen caps. So: As I mentioned, it’s a bit backward-looking, and the settings in gritty parts of Chicago are darker and dirty. The film is definitely feels like a film from the late 1960s or 1970s.

9 to 5, on the other hand, is an eighties movie. The colors are a bit more pastel, the whole film is a bit brighter. You can see that the film is more like The Secret of My Success than Network. Even though it’s set in Manhattan, it’s not the Manhattan of Midnight Cowboy or Escape from New York (released a year later than this film). It’s a bright, optimistic vibe, where the women are getting liberated and overthrowing their sexist, egotistical, lying, hypocritical bigot bosses.

Oh, but the professional look of 1980. The tight curls and those giant glasses. Most people think of the big and teased hair as the 80s look, and God bless them for their either forgetting or never knowing. The teased hair is flattering. This is not.

I think Missouri might have been a trailing indicator for this look; I remember in the middle 1980s, when someone would give my poor sainted mother a makeover, it always included a cropped, curly perm, big glasses, and too much makeup. She ended up looking like a zombie.

At any rate, 9 to 5 spawned a television show that ran for six years through most of the 1980s. I vaguely remember it.

And in a stunning twist, I watched the film a couple of times on cable when it was fresh, but not on Showtime. It must have hit HBO when friends of the family were early adopters of cable television, and we spent some time at their house including our last month living in Milwaukee after my mother gave up the apartment in the housing projects and before we decamped for Missouri at the end of the school year.

So I saw this film when it was new, and I was young, and the world was pastel and promising. So I remember it with more affection than it probably deserves on rewatching.