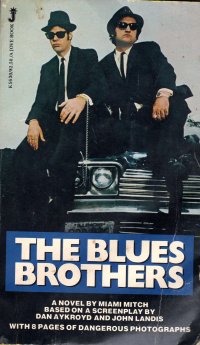 All right, for those of you born in the twenty-first century (Just kidding! What is this, an app-based video because the damn kids can’t even handle a YouTube video that’s measured in tens of minutes? Not hardly!), I will sum up the plot: After a failed robbery to pay the members of his blues band, Jake Blues goes to prison for a couple of years. When he gets out, he discovers that the orphanage where he and his adopted brother Elwood grew up is under the threat of closure for nonpayment of taxes (what?), and a group of Nazis are hoping to buy it at auction. So they decide to get their blues band back together to do a special gig at a ritzy joint where they’re not actually scheduled to perform.

So that’s it. The story is them gathering the band members who have scattered and putting on the show.

The movie, as you recall, gentle (old man) reader, was almost a musical with numbers by James Brown, Aretha Franklin, Ray Charles, and others in their various scenes. However, in each of those iconic scenes, the mention of any music is omitted, and the whole scene is over in a couple of sentences or a paragraph. Other lengthy segments from the film, such as the car chase through the mall, are also handled quickly and dismissively, with memorable lines like “The new Oldsmobiles are in early this year!” completely missing.

Given that this is much of the draw of the film and that the humor in the film is kind of droll and not really laugh out loud funny to begin with, the book is not a very good read. As I mentioned, it’s probably put me off of movie tie-ins for a bit, especially as I think the running theme is played out (although with its help, I am at 49 books read so far this year).

I did pick out a couple of things from the book to flag though, tucked below the fold so I do not further tax your patience with my book reports which are more about me reading the books than the books themselves.

“Shit,” Curtis said. “What’s one more old nigger to the Board of Education if they buy this place? And if those others buy it, I’ll be lucky if they don’t put a brand on my ass.”

It is so weird that society functioned when the That Word was used in popular culture not to demean black people but to demean those who would oppress them. Because, let’s be honest, popular culture never really approved of overt racism, ainna? Not even blackface shows, which were more about using stereotypes to poke fun than to oppress. C’mon, man, haven’t you read any 17th century drama when the country bumpkin (the original meaning of the word clown) was picked on. And was, erm, in England probably white? Ay, I feel like I might have been on the last bit of the fading wave of actual education before it started to recede into the barren beach of ignorant indoctrination it is these days.

Wherein Brian J. Gets The Reference From Old Blaxploitation Soundtracks

Jake continued to push as if he had not heard him. “You just go ahead and push your stuff, Mr. Junior Superfly. Go ahead, Mr. Pusher.”

A number of years ago–what, eight years ago, you say?–I got into the soundtracks from Shaft and Across 110th Street (because the song is the main titles for Jackie Brown which I had just watched). So I picked up not only the soundtracks for Shaft and Across 110th Street (but not Jackie Brown) but also The Mack (by Willie Hutch, and later Foxy Brown) and Superfly by Curtis Mayfield. The theme petered out in my purchasing, though, but I did get a bunch of Bobby Womack CDs (and later a couple of his and Isaac Hayes’ LPs). I also got a single or EP from the more modern artist called Foxy Brown, but I was disappointed with the last.

Where was I? Oh, yes: I got this reference.

Also, let it be known that the principal of my son’s religious school approves of this musical exploration of mine. I was in the car line to pick him up a couple of weeks ago in the vehicle not laden with lectures on CD. So I had the windows down and streamed Bobby Womack’s Communication at some volume. As we awaited my son’s arrival to the car, she asked me what I was listening to, and said, “Nice,” when I told her who it was. Either she was being polite, she knows seventies R&B, or she was encouraging me to listen to more of that and less of the heavy metal with the bad words in it while I’m in the parking lot of her school. Gentle reader, I choose the best spin to put on that.

The Word Nobody Cares About

With a shriek of burning rubber, the Bluesmobile leaped almost vertically in the air, then blasted forward, scattering a trio of the quick-reacting crackers, who managed to make a grab for some part of the car or driver.

Nobody would make opprobrium for the racial epithet cracker. And you know what? Nobody should. It’s just a word. With no magic in it.

At any rate, a poor representation of a film which had the pacing of a 70s comedy and is based on a Saturday Night Live sketch, and although it’s not, say MacGruber (which I took my poor, long-suffering, beautiful wife to see on our anniversary). But Saturday Night Live films really rely on you liking the sketches to like the movies. And novelizations are probably one step too far. Maybe three steps too far for MacGruber. Or The Ladies Man, which I also dragged my poor, beautiful wife to see in the theater (note that my beautiful fiancee had better taste and made me go see A Night At The Roxbury with a friend). Where was I?

Oh, yes. Probably not worth a read. Might be better than a novelization of The Blues Brothers 2000 if such an abomination exists. Would have been better done by Alan Dean Foster, assuredly. And made me eager to get back to Executioner novels.

Also, as a side note, I might have mentioned that I’m going to pay more attention to the DVD and VHS selection at book sales and garage sales. I was a bit taken aback and only a little ashamed when I was talking with my beautiful but long-suffering-bad-SNL-movies wife about this book and she wondered if we had it on video. And we do not. Between this and not having Cocoon, I realized that I have to start treating videos for sale in the wild, cheap, like bag days at the book sale: If there’s even a possibility that I might want to see this film someday, I’d better plunk down a buck/fifty cents/two bits for it now since the time might come where I will not be able to find it if I do.

Or maybe I should just buy them all up so I can have a great stock should they become valuable someday when the bad words have led to their ban on streaming and whatever comes next. Unless they outlaw VCRs. At which time, only outlaws like me will have VCRs.