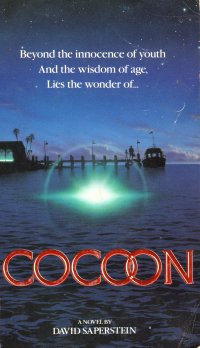 In continuing with my movie tie-in book reading of this year, I picked up this book which has been haunting my to-read shelves for thirteen years and two homes. I remember the film well–it was on Showtime in my youthful trailer park days, and as you might remember, gentle reader, when a movie was on Showtime between 1985 and 1988, I saw it a bunch. So I remember the film passably well, especially Steve Guttenberg shouting, “If this is foreplay, I’m a dead man!” which of course would have stuck with a fifteen year old who probably learned about foreplay from the American Heritage Dictionary. Remember Steve Guttenberg? In the late 1980s, he was in every other movie (actually, it was only nine major movies in four years, so it was only every other non-action film).

The book has a different story arc than the movie: A charter boat fisherman takes an assignment for what he quickly learns are aliens (I mean, on page 15, they reveal themselves as aliens). They’re looking to recover almost a thousand (not ten like the movie) of their fellow Antareans that have been submerged in coccoons off the coast of Florida after the sinking of Atlantis. They’ve bought an incomplete senior condo project and turned one of the buildings into a processing center for reviving the dormant aliens. Four seniors from the complete building on the property discover the processing room and mistake it for a health club, so they try the equipment and find that it rejuvenates them. When the Antareans find that the salt water has damaged the cocoons, they’re left without an army–until they decide to recruit seniors from Earth.

So it’s quite different from the movie, which is a simplified version of the novel with subplots removed. I wondered if the book had come first followed by the simplified movie, but according to this article from 2019, it sounds like it went from story-for-movie to movie to novel:

Finding a way to get my story out to an audience did not come easily. I heard 51 “noes” before a “yes.” Among the rejections were many who deigned to read a few pages and said things like, “This is a wrinkle story,” and “Old people don’t go to the movies.”

It took five years to get a movie made, with a script by established screenwriter Tom Benedek and direction by Ron Howard, in 1985. The positive reactions to the story said to me that I got most of it right. The movie won two Oscars, and critics called it “feel-good” and “uplifting.” My novel was published after the movie. Cocoon was a New York Times best seller and became a brand of sorts, and I went on to a new writing career.

So perhaps the novel tracks more on what Saperstein had in mind; although he provided the story and later wrote the novel, he did not write the screenplay. He does work in a bunch of back story for the characters, including talking about what the seniors and their wives did before retiring to Florida. He even drops a couple of paragraphs describing a helicopter pilot into the middle of the narrative. So it gets some of its novel length with these back stories which are naturally not in a movie.

It was a pretty good read, though, even with its changed story line.

Brian J., did you flag anything in this fun little novel? you might ask. Of course I did! Not that I remember what. Let’s see if I can remember why I marked passages in the book.

Ben Green was half listening as he followed another train of thought. Then he blurted out, “I feel like I’m in a science fiction movie.”
Joe Finley laughed. “We are, buddies…we are!”

Homophones Are Not Your Friend

His curiosity was peaked as the crew from both boats ran to the back door of Building B and disappeared inside.

I had to look up piquish myself for a recent post, so I am acutely aware, although in my case I used peckish which is almost a homophone of piquish.

One final note: According to the production notes for the film, Wilfred Brimley was my age when he played one of the senior citizens. Which is more humbling and aging than realizing this film came out 36 years ago. Wait, no, now that I did the math, they’re tied for making me feel old, old man.