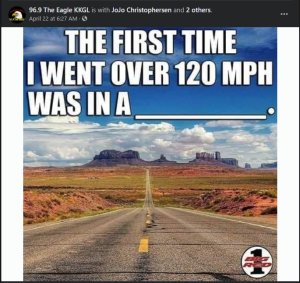 C’mon, man. Even when I had a Mustang with the five liter engine and twice as much horsepower as my preceding vehicles combined, it was at the end of its lifespan and all systems were suspect. Also, its speedometer topped at 85. Also also, I am a fraidy cat.

So the first and only thing I’ve gone over 120mph in is an airplane.

I could not tell my friends on Facebook because 1) They’re not really friends; they’re people I briefly interacted in real life with decades ago, and 2) I’m not providing any written content for Facebook these days; I am saving it all up for you, gentle reader. Which explains why I brought this up even though it does not portray me in a flattering light. Because I’m keeping it as real as it gets on the Internet.