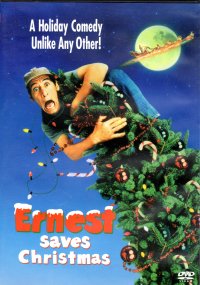 I put a Christmas tree up on November 1 (well, our Trunk or Treat this year was a Christmas-decorated trunk, one of three that showed up at our church this year, so I moved the little Christmas tree from the trunk to the parlor). So of course it’s not too early for a Christmas movie at Nogglestead.

In the middle-to-late 1980s, Ernest was everywhere. The character started as a commercial pitchman in Tennessee, selling a variety of products in different places–in the St. Louis area, he appeared in commercials for Laclede Gas. Their, what, popularity led to a television show Hey, Vern, It’s Ernest. And then a series of films–Ernest Goes To Camp appeared on Showtime, so I saw it more than once. Regardless, I am pressed to think of another career and pop cultural arc like that one.

This is the second film in the… franchise? Ernestverse? Santa flies to Florida seeking his replacement, hoping to lure a children’s television host who just likes kids into the gig. Ernest plays the cabdriver who picks up Santa at the airport and helps him to find the star, who is on the cusp of taking a role in a low budget slasher film as his other, more child-friendly gigs dry up.

Basically, it’s a setup for John Varney (not John Varley, the author), who plays Ernest, to mug for the camera with his schtick: He believes he’s very competent at whatever he does, and he has stories to back his his braggadocio up, but he manages to screw things up in just such a fashion that things turn out right. Man, what a crazy, optimistic time the 20th century was.

At any rate, it’s mostly aimed at kids, and my boys thought it was a bit cringey. But they don’t find these films cringey enough to stop watching films with their father, so I’ve got that going for me, which is nice.