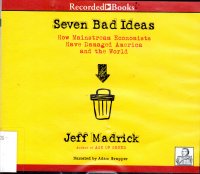 I had hoped that this would be an antedote or rebuttal of Thinking Like An Economist: A Guide to Rational Decision Making, a Great Courses lecture series that started out explaining how free markets were good, allowing to use choose their actions to make their lives better according to their wishes but then veered into the econonmists know better and must maniuplate the “free” market so individuals make the right decisions.

Written not long after the banking crisis of 2008, this book instead takes the tack that the state did not have enough control of the economy to prevent the problems, and that the free market economists like Hayek and Friedman were the deluded puppetmasters who made the problem. Not Keynes and Krugman and their statist ilk. The problem with real socialism economism is that it’s never been tried!

I only made it a couple of chapters into it before abandoning it because I was listening to it while driving, and experiencing a Red Curtain of Blood (RCOB) and shouting Eff you, you effen mothereffer, that’s not true! until you’re hoarse while driving is dangerous.

So that’s my report. I didn’t make it deep enough to get to the enumerated ideas, but I am pretty sure that economic performance over the decade or thirteen years after the crisis would disprove the author’s beliefs (not arguments, which can be refuted, but beliefs which can only be reinforced). But I bet he loves him some Build Back Betterer thinking.

If you’re interested, I’d recommend reading it in throwable paperback rather than audiobook.