Last year, my beautiful wife ordered me a cord of wood for Christmas so we could burn wood fires. In the past, I’d had Duraflame logs or small bundles of wood I bought at the grocery, so it was even more pleasant to have a wood fire going every evening at Nogglestead. And it helped with the propane costs as the wood fires heated up the bricks and slowly released the heat overnight, limiting the amount our furnace ran.

Being this is 2021, man, and the last two years have kicked my hoarding and stocking up instinct several notches (to 11), this year I ordered 3 cords of wood before the winter from the local arborist (whose radio ads I’d heard decades ago in St. Louis–apparently, it’s at the least a regional chain). We might only burn a little over a cord and a half, but I’d rather have wood on the pile that I don’t use this year than need wood I don’t have in January if propane is not available. Yeah, I might be going a little crazy, but at best (or perhaps worst) my estate sale will look like a fully stocked grocery and home supply store.

The arborist sold the wood in “bags” of about a third of a cord each on pallets, and it took three trips to two different locations of the arborist to bring me three cords. The arborist had a dump trailer, which meant nine pallets of wood were dumped at the end of my driveway.

The wood came on Thursday, which gave me a chance to pick up some additional cinderblocks on Friday. And then, on Saturday….

Well, on Saturday, I warmed up with a martial arts class, had a bite to eat, and then the boys and I got to stacking.

We spent four hours on Saturday, almost until sunset, before I called a halt. Although I had thought we could condense nine “bags” of wood to seven pallets, apparently my stacking is not as tight as it could be. It took us longer than it should have because the oldest found lots of work that was not moving or stacking the wood, including hamming it up for his beautiful mother who took thirty-some minutes of his running monologue of what he was doing. Also, the boys liked to throw wood; in clearing the pallets, they threw some of the wood in the direction of the opposite of where we were stacking it. And instead of using a wheelbarrow to move it, they preferred to throw the logs into a pile three feet from where it lay and have me come to that pile, which was ten or twenty feet from the wood pile, to get the logs to stack. Well, we all got our exercise.

On Sunday, we picked up a couple more cinderblocks to make room for two more pallets to stack the wood on. Using the wheelbarrow, we finished the last half cord or so in about an hour. 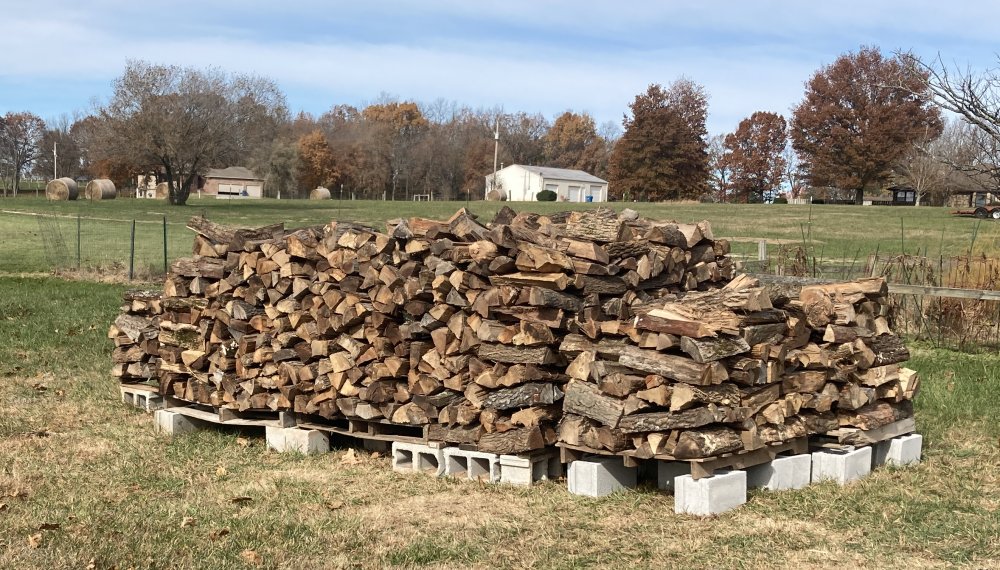 Strangely enough, although my fitness tracker says I walked ten miles between pile A and pile B, I only got a couple minutes’ worth of exercise.

As I said, although it’s not my primary heating source, I am happy to have the wood in case I need it.

My beautiful wife did not ask me how I knew how to stack wood; if she had, I would let her believe it’s because I am a man, and not because I read homesteading blogs.

1 thought on “A Weekend’s Work”