In the review for A Bend In The Road, a book of poetry put together by a nursing home operating company featuring poems by its residents, I said:

Man, I remember nursing homes in the 1980s. Two of my sainted mother’s aunts ended up in a couple of different facilities, and the facilities were as cold and efficient as hospitals but with less care. It depressed me to go visit those old ladies–I was young then, and impatient. Times have changed now, though; one local senior living facility has been running ads showing a tatted up, goateed and mohawked pierced grandpa with big headphones on taking a selfie. One expects the new facilities are more fun, but then again, the ones that advertise in 417 are probably the nicer ones anyway; one would probably find my relations in more traditional centers.

I went through several copies of 417 we had on hand to try to find the ad in question to share it with you, but I could not find the full page ad nor remember the name of the place to look for the ad online.

But I got the new issue of the local slick this weekend, and Turners Rock has reduced it to a quarter page, which trims it a bit, but you can see whom they expect to live in their senior living facilities: 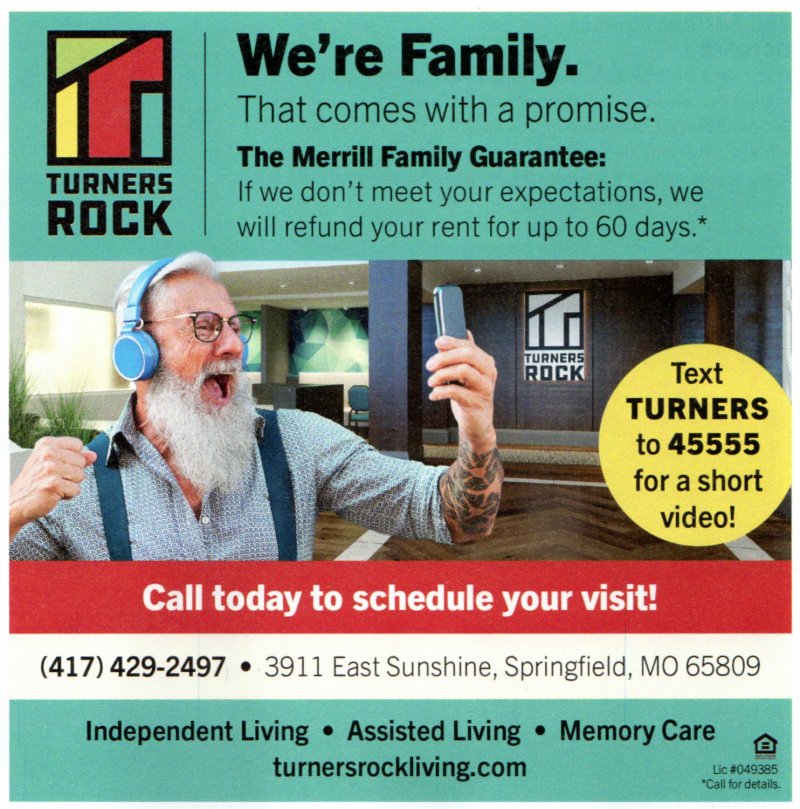 I guess he doesn’t have a mohawk after all. And we can’t see piercings, but they’re definitely implied.

You know, I’m not far off of eligibility for senior living facilities, but I can’t see myself downsizing that much. I have too many books yet to read and too many records to fit into a small apartment, and I am used to playing my music as loud as I want. But fifty-something is not turning out to be adulthood and elderliness that I remember from when I was young. I cannot tell whether that’s because my perception has changed as I have aged or whether being older has changed. Probably both, and both to a large degree. But, truly, truly, I say to you, most of the metalheads I know these days need Advil after a concert, not so much for hangovers but for body aches.

In a related note, they’re building a lot of senior living around Springfield, giant complexes with hundreds of units. Theoretically, many of those seniors will be moving out of their homes and putting them on the market. And builders keep building lots and lots of new single family homes. Who is going to live there? The population has been holding steady. We haven’t been cranking out babies to warrant this much growth (we only did one for me and one for you but not one for the bishop). Are the powers that be planning for a population boom from somewhere else (abroad or aliens?), or are they merely pursuing a build-build-build strategy not unlike China’s which will lead to an eventual bubble bursting?

I dunno, but I’m not taking out any home equity loans based on valuation that says Nogglestead has almost doubled in worth since we’ve been here.