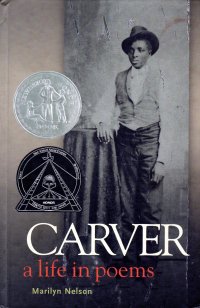 I picked up this Scholastic book to browse during a football game, and I thought, a collection of poems about the life of George Washington Carver for kids? Who needs that? Who would read that?

But, you know what? I kind of got into it eventually. The book builds poems, not very poetic poems but rather poetry-prose with line breaks and distinct phrases instead of full sentences–to talk about Carver’s incidents from Carver’s life. From his early years as a slave and his early attempts at formal education to his eventual work with the Tuskogee Institute and, yes, peanuts.

So perhaps a good intro to an amazing life, but you would definitely want to follow it up with something more weighty, such as George Washington Carver and/or a trip to Diamond, Missouri.

Also, you know George Washington Carver was a black American. This book, coming from the turn of the century, makes a couple of references to our people, and the poet’s father was one of the Tuskogee Airmen, but the book is not an especially racially themed book. One wonders whether the poems were written twenty years later would differ greatly from the interesting and straightforward presentation of a fascinating figure of American history we have here. Sadly, one thinks so.

Oh, but this children’s book has the baddest word ever in a poem called “My People” about the envy the other instructors and staff at the Tuskegee Institute felt toward Carver. But it’s further proof of my latent white supremacism that I read books with the baddest word in them. That is, books written in the dark past of twenty years ago.