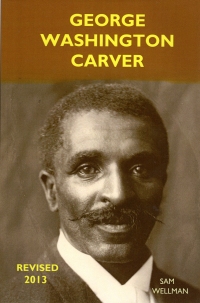 I received this book as a gift at my mother-in-law’s birthday party. She was giving away things which came with a request; in this case, I got this book and information about the George Washingont Carver National Monument just south of Joplin, Missouri, and a request that I take my children there this summer. So I started reading this book in the beginning of August, and I took my children to the historical site as requested, but the book sort of fell to the bottom of the stack on my side table.

The book itself is a young adult faith-based biography of the plant doctor. As such, its chapters are short and punchy and it features a lot of Carver talking to God or reflecting on scripture. As Carver was a devout Christian and often lead prayer groups in his various colleges, it’s probably not out of place, but I’m sure there are plenty of 21st century readers who would take issue with it. If you’re such, this is not the biography for you. But as a young adult book, it’s probably a good starter and high level overview.

I won’t recount the fascinating life of the fellow who was born a slave, lived in southwest Missouri during the aftermath of the Civil War, and became an artist before going to school for biology and agriculture. I will, however, note that he walked all over Missouri and Kansas to find a better life for himself and to take advantage of various opportunities and that he did all this and homesteaded for a couple of years in Kansas before going to the university. He did a lot before he was thirty and then his life and fame took off.

That is what fascinates me: how self-reliant young people were in the ninteenth century. I can even tell tales about my father hopping a train with a gun at thirteen to go hunting in northern Wisconsin, but it’s so far from my late twentieth century urban childhood that I cannot imagine that sort of thing without reading about people who actually did it.