So, as I might have mentioned, I often have a game of Civ IV running in the background so I can play a couple turns whilst waiting on a build or something. It’s been that was for over 15 years and many PCs, as I mentioned. But I’m really trying to find things for little work breaks that are not reading the news or blogs because that’s not optimal for my frame of mind.

Given that I’ve also taken to playing it a bit at night when my boys have taken over the den with video games, and suddenly I’m getting a little tired of Civ IV. After only fifteen years, right?

So I did something crazy. I opened up the Steam store to look for something else to play. 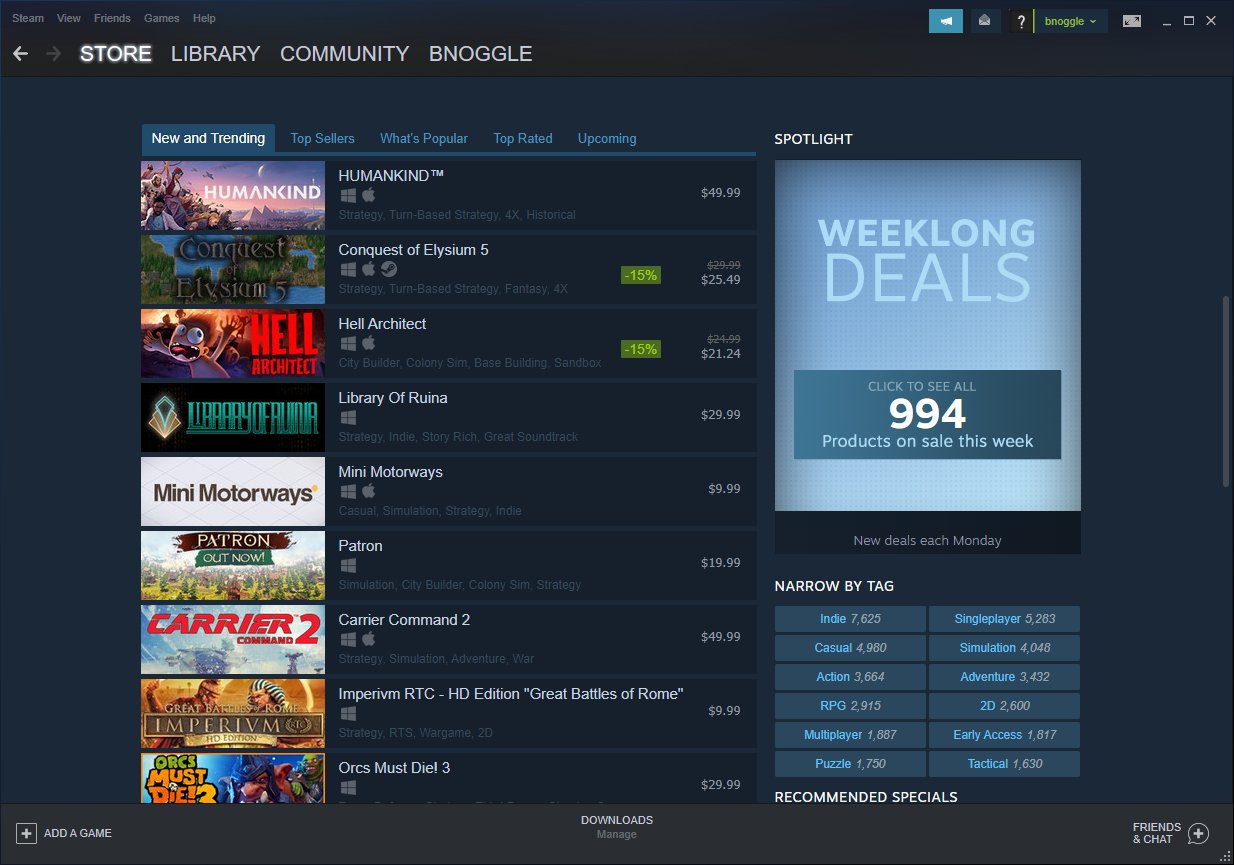 And immediately, I got list after list in category after category of games, some of dubious provenance–Chinese or Japanese characters in the screenshots and whatnot. Screen after screen, with prices ranging from free to under a buck to sixty bucks for new big releases in known franchises.

So I scrolled, and I paged forward, and I tried different categories, but I found it hard to decide. I’m sure my boys are used to picking games from a list, and are probably not hesitant to download and try a bunch of things before deciding what to play long-term (and since they play online with friends, critical mass sometimes contributes to their decisions).

But you know me, gentle reader. I like to browse. I like to pick up books, music, and video games turn them over in my hands. In the case of the video games, look at the box, read it, look at the screenshots on the back. The listings on Steam have all of these things and videos, but just the packaging indicated whether it was a cheap game (just cellophane on a sleeve) or something more elaborate (a box). But I did not get that.

And let’s just reflect upon those games that I have bought in boxes. A lot of times, I install them, run them once, maybe play the training level, and then wander off. It’s certainly true for RPG, real-time strategy, or first person shooters that I’ve downloaded. I’m not looking for games to fill up large blocks of my evenings; I want something I can switch windows, play a bit, and switch back. What I’m probably looking for, then, is casual gaming, but aside from downloads of PopCap games back in the day, for some reason I want something a little meatier.

Clicking through the menus and screens, I got the anxiety of an old man, afraid to click on things. Well, maybe not quite that bad–maybe it was just the indecisiveness of a person in a bookstore with a gift card.

But, eventually, I did settle on a game. Master of Orion. Widely characterized as Civilization in space. And it’s from 1993.