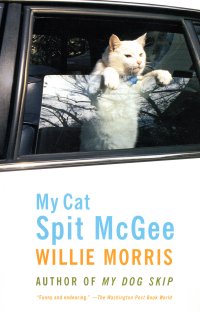 My goodness, I bought this book thirteen years ago, clearly anticipating a time when I might need to read a book about an animal for a summer reading challenge. I thought I would read a Cleveland Amory book that I’ve got around here somewhere, but I found this one first.

The author is a former editor of Harper’s of some controversy back in the 1960s who then moved back to Mississippi where he became a university professor and eventually wrote several books, one of which (My Dog Skip) was made into a major motion picture.

The book describes how the author, in coming into a second marriage late in life, discovers that his fiancee likes cats, and they’re going to get one. So he thinks about and writes about (a lot) what it would mean for him, a dog person. Then he gets a cat, and that cat’s kitten is Spit McGee who becomes his cat. And they get other cats.

The chapters are about this musing, the lineage of Spit, some adventures with Spit, and whatnot. To be honest, I typed Skip twice in that sentence because the book might have been a bit of a cash-grab trailing the success of the movie and its interest in its book. The dog Skip, the cat Spit, see? But the dog story is about a boy growing up in the south in the olden days (when everything was racist, which is different from now, where everything is racist), and this book is dedicated to a child actor from the film who met Spit McGee when the author brings the cat to the set. The author also takes the cat various places, like his childhood home and his father’s grave. So Spit McGee and this book are also a bit of a story about getting older and life changes there as a bit of subtext. The author actually died in 1999, not long after finishing the book.

And boy howdy, the name-dropping. He lives in Jackson, the state capital, so he’s familiar with pols, including Trent Lott; he mentioned being friends with Eudora Welty; and so on, a bunch (yes, he did meet Cleveland Amory once).

I also had some Mmm-hmm moments about things he drops in. He proposed to his second wife in the Old Senate Caucus room in front of a thousand people. He and his wife buy a stately old home built in 1940. Friends, when this book was written, that home would have been fifty-some years old. Gentle reader, Nogglestead is almost that old. Honormoor in Old Trees would have been forty years old when we lived there. The house in Old Trees was seventy years old when we lived there (although renovated and stripped of its stained glass before we moved in). So the house might have been nice and had Spanish moss draping from the magnolia trees, but it was not that old. Ah, well. I also flagged a couple of extraneous name drops, but most of the names didn’t actually mean anything to me.

So, I dunno, it’s okay as a book, and it’s competently written, but I am not really sure how much it needed to be written nor what it’s goals were.

But I’ve counted it as my True story about an animal entry for the reading challenge even though it’s more about the man than the animal.