So while sitting in the vet’s parking lot yesterday, I had a chance to browse through the Springfield-Greene County Library’s current quarterly newsletter which generally includes a schedule of activities at the various branches. This quarter is pretty thin because semi-governmental and medical and psuedo-medical facilities are the last to give up on the late unpleasantness. Which explains why I was sitting in the parking lot of the vet’s office, killing time.

I guffawed (I am old enough, gentle reader, to be described as gruff instead of just an ass, and I can now guffaw) when I saw the virtual shared film discussions for this quarter. 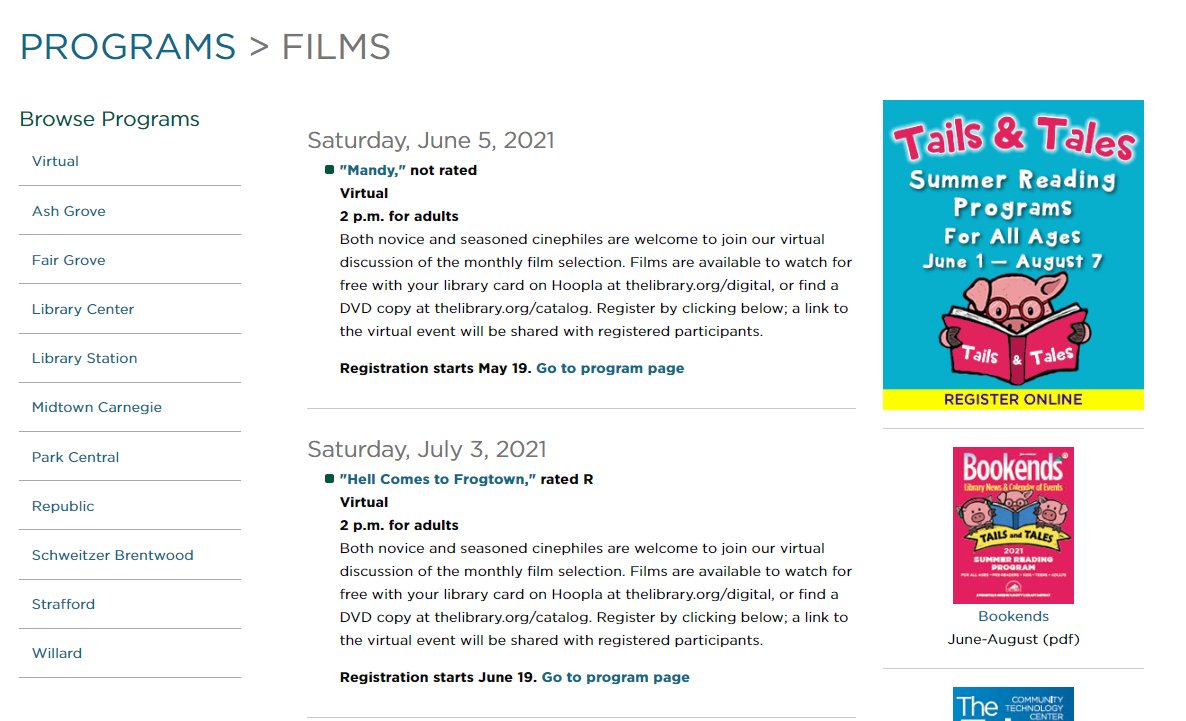 Pseudo Rowdy Roddy Piperaste will argue that They Live! is Piper’s masterpiece mainly because that’s the only film they’ve seen him in, but those of us raised on USA Network’s Up All Night in the 1980s know that Hell Comes to Frogtown is truly his pièce de résistance.

In it, Piper plays Sam Hell, who is a wanderer in a post-apocalyptic wasteland whom, the military medical corps discovers is virile–the apocalypse has left much of humanity incapable of bearing children, so the race is on to repopulate and have another go at the war. He gets drafted to impregnate some fertile females, but they’re kidnapped by a mutant warlord in Frogtown, so Sam Hell and two Army women have to go to rescue them.

I watched it once or twice on Up All Night and then I recorded it–so I watched it over and over during my college years. I eventually got it on videocassette, so I got to see that woman who played the psycho in the three part Hunter television series’s boobs–that scene with Rowdy Roddy Piper was cut from the USA Network version.

“Are you going?” my beautiful wife, also in the car in the veterinarian’s parking lot, asked.

I mean, what is there to talk about? That it’s a sterling example of the post-apocalyptic genre that we got fed a steady diet of in the 1980s (but not recently, though, even though a major national rival is currently threatening nuclear war with the United States if we don’t let it do whatever it wants). That the videocassette market and the new cable markets made for quite a collection of B, C, and D movies. Kind of like the streaming providers now are churning out, except they’re doing “series” instead which is more of a commitment of time.

Hey, I’ve just gotten used to having time to watch movies in my normal week, so I’m not about to start extending that to entire six- to thirty-hour blocks of time to watch series. Also, I’m skeptical of modern movies and television, and I have many, many fine films to go through in my newly rapidly growing again physical media library.

But Hell Comes To Frogtown? Perhaps I’ll revisit it sometime soon. And the virtual cineaste’s discussion is a month away. If I have nothing else going on that afternoon, maybe I will join the Zoom call.