So over the course of the last year, as I have watched DVDs, I have from time to time picked up the DVD remote after the film ends to eject the disc. A couple of times, I was taken aback when I looked for the eject button on the remote, and it was not there. I mean, I haven’t generally watched enough films nor gotten so in depth with the functions of the DVD player that I’m intimate with all of its functionality, but I do generally know where the play, pause, stop, select, power, and eject buttons are. But, as I said, a couple of times over the last year, I’ve picked up the remote and have struggled to find the eject button. I mean, I am pretty sure I have pressed the eject button after the movie. Heck, I might have even pressed the button on the remote to put this particular DVD in. But it’s not there now.

I chalked it up in the user error column. After all, a flaky receiver and some ad hoc reconnecting inputs in the back have led to some strange results when trying to watch a movie in the past (see also Movie Night at Nogglestead: THWARTED). I have started to think I’m reaching the age where I get flummoxed by technology. That’s not really the case, though, as connections to new devices are getting simpler (just stream it on your device!). But the Case of the Disappearing Button intermittently bothered me. And then other times, I would push the button to eject the DVD.

We also have a Sony Blu-Ray player which we use very infrequently. Its remote looks almost exactly like the DVD remote, but it has a BD at the bottom instead of DVD.

You see, it has an open/close button on it. Maybe I’d gotten confused between the two, although I really don’t watch many Blu-Ray discs as you don’t find them for a buck at garage sales yet.

I try to keep the remotes organized on the side table by the entertainment center. But when the boys use them to put on their video game systems, watch television, or occasionally put in a movie, they tend to roam to various seats, under blankets, or under pillows/cushions. I am not immune–sometimes I will pick up a remote and lay it on the entertainment center somewhere when I’m putting in or taking out a movie only to “lose” it for a moment where I cannot remember where I laid it.

So this weekend, while preparing for my bi-weekly movie watching (it has been twice a week the last two weeks and more when I include watching a movie with the boys), I discovered the truth.

For some reason, I have two Sony DVD player remotes. 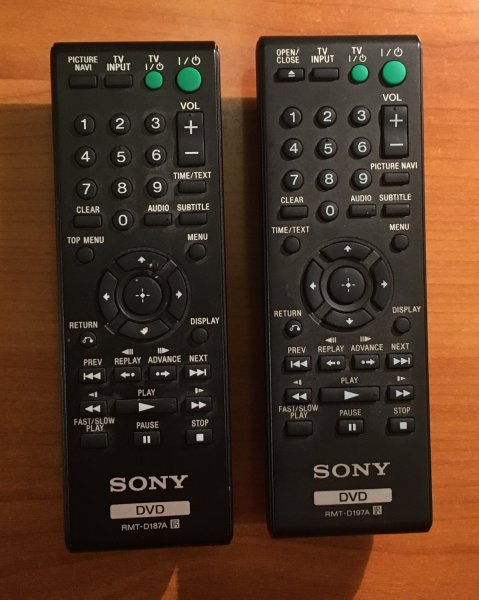 Which is odd because we only currently have one Sony DVD player; the one I stored last November was not a Sony. It might have been a previous model that I replaced at some point; I know I used to save old remotes in a bin (I have since donated them). This one would have been spared, though, since it looks like it works with the current DVD player.

And it does. All the buttons work as expected, so I was able to conduct the movie. So I would pick up whichever one I found first, and when that was the one without the open/close button, I would briefly question my sanity. Which, I am pleased to say, is intact is not disproven. And the world might not actually be a Philip K. Dick illusion that a small inconsistency can dispel.