Last weekend, I undertook the lengthy project of reconfiguring the electronics of Nogglestead. I’m going to be a bit long-winded about it, so I will tuck this under the fold. But it does contain a single useful tip, maybe.

As far as March 2019 (I was going to say last March, but then I realized that last March might be eight months ago and not twenty-two–how time marches on, so to speak), we started having problems with the receiver in the den, the one connected to the entertainment center and big television. Audio from the VHS and the DVD players, routed through the receiver, would not play. It failed intermittently for a while, which meant sometimes we got nice sound for our videocassettes and sometimes not. Eventually, it failed so consistently that it was only succeeding intermittently, so we got around the problem for over a year by plugging the VHS and DVD players directly into the television when we wanted to watch a movie. Eventually the audio on the DirecTV box failed, too, but we had it configured so the box was connected by HDMI as well, so the audio was always coming to the television, but we ran through the sound through the receiver. So when the audio for the satellite failed, we only had to turn the television volume up to hear it and did not need to switch cables.

We talked about replacing the unit with a new one, but I hesitated. Not only was it a significant cash outlay even before our current belt-tightening, but I was concerned that the new units would not handle our old components very well. So we switched cables when we watched movies and enjoyed the sound through the television speaker.

But this autumn, our latest all-in-one record player/Bluetooth/CD/whatever in the parlor failed, the latest in a line of the Victrola/Crosley units that only last about six months before the record players go south. I received one as a gift when we lived in Old Trees that lasted almost a decade. Since that one broke down, I bought two that lasted about six months, and this last I received as a gift from my beautiful wife who bought it on Amazon because it was highly rated and because she did not know it was essentially the same thing. So it looked like I was going to spend a second consecutive Christmas season without the annual Christmas records which are a valuable part of the Christmas season.

I have not found a repairman to fix the console stereo that I inherited, and I am just now starting research and discovery of how to repair electronics and audio equipment (I have a couple of books, and I have been watching YouTube videos), but I don’t want to start on it as my first hatchet job. I had a turntable/tuner unit in the garage that I picked up some years ago, but it turns out that it, too, needs a repair–I will probably start tinkering on that one. My wife had a turntable she used back when she was ripping albums to MP3 files, also some years ago.

So it occurred to me that I could take the receiver unit from the upstairs entertainment center–which is really a 22″ television/monitor combo attached to a receiver with a DVD player, VHS, and PlayStation 2. We had this unit in our living room upstairs so that the boys, when they were toddlers, could watch Sesame Street and other PBS upstairs. We had two DirecTV boxes back in the early days of Nogglestead. When we cancelled DirecTV at one point, I got an antenna and converter box to still have PBS available, but they were older then and watched DVDs of Scooby Doo, GI Joe, or the A-Team. But that has dwindled as they’ve aged. Mostly, now, we use the downstairs television for everything. So we only play Karaoke Revolution on that PlayStation, and only once every couple of years.

As I was trolling through old posts, I found an image of that receiver and DVD player in our house in Old Trees; apparently, in those days, it was hooked to the big screen, and the other receiver and audio components were downstairs attached to a 25″ tube television. 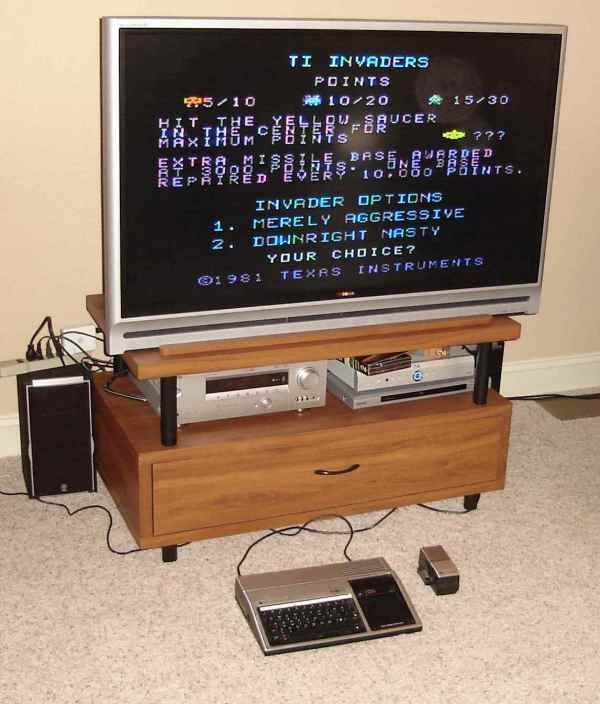 So most the electronica of which I speak is over fifteen years old. Clearly I am not an early adopter. The stuff still works, so why not? Besides, I’m at that point in my life where I have frozen everything in the house to about the year 2000, so that when it comes time for my estate sale, people will wander through the house in wonder and feel like they’ve stepped into a time capsule. I know I felt that many times around 2000 when I was hitting estate sales every weekend.

At any rate, when I decorated for Christmas and did some minor minor reconfiguring of Nogglestead, I had a thought to re-arrange the electronics. But I knew it would be a big undertaking, so I held off.

This last weekend, we had a short 8:00 church service and a 3:25 football game, so I had a large block of time, so I decided to get at it.

Which was prescient on my part, as it took roughly four and a half hours.

So here’s what I did:

So it’s good for gaming or watching DVDs through the PlayStation.

The receiver upstairs might be a little flaky; sometimes, it doesn’t seem to pick up the audio from the components, so I need to leave it on all the time. When I tried out the phonograph, connected to the phono input, I got sound, but also some loud electronic pops not like what you get from a normal record player. I am sure real audiophiles out there know what the trouble is right away, but it took me a day or so to think, Oh, yeah. The turntable itself probably had a pre-amp, and the receiver probably has a pre-amp on the phono connection. So when I ran it through another input, it worked.

It is a Christmas miracle. We get Christmas records this year. I know it’s a twee thing, but it made me so happy. I have come to really count on those records as a tradition, as we listened to some of them when I was a kid (and, as I am sure I have mentioned, some of them have address labels on them with my sainted mother’s Marine Corps Air Station address).

So it was a successful, if lengthy, project all around: Records upstairs, big speakers working for the video components downstairs, and the boys have played delightedly together on the Switch now that it can dock.

And the cost was literally nothing: I labeled the cords with file folder labels we had on hand, and I tied up the cords nicely with some zip ties that I bought a long time ago, probably for this purpose, but that had floated around in my garage workshop cabinets for years. It’s good to put them to proper use.

Which brings me to my tip: When tying the cables together, instead of just making a loop and binding the loop with the zip tie around the whole loop, I made a figure 8 with loops around the each side of the cable and the intersection in the middle. 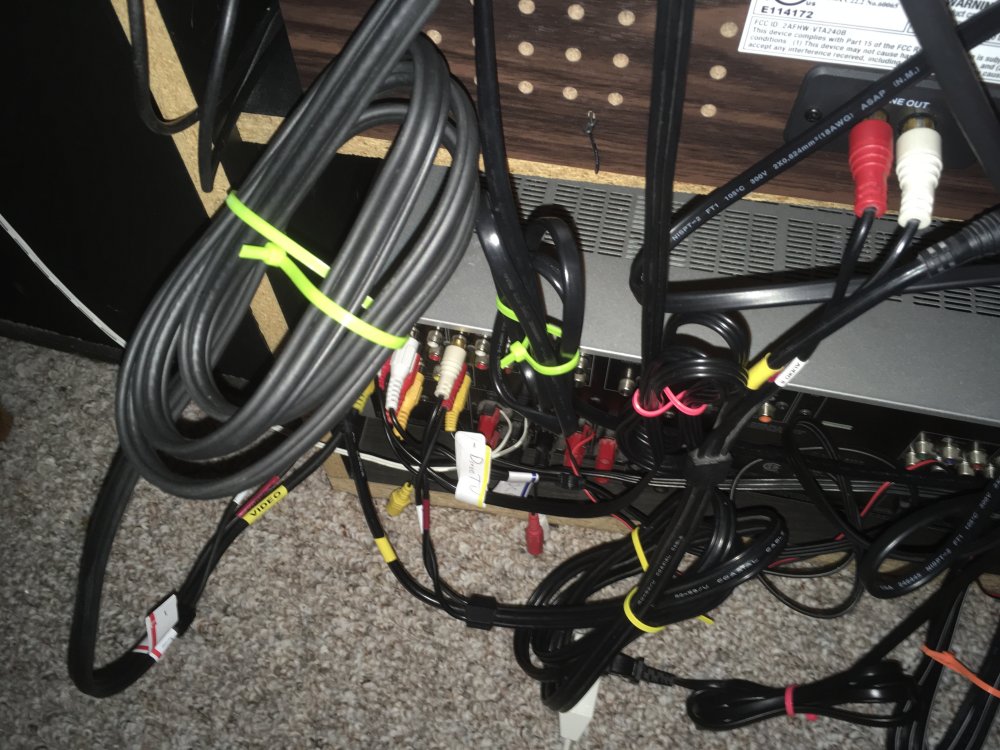 That will give you a good cutting surface when it comes time to undoing the tie without risking cutting the cables themselves.

Which I put to pretty immediate use.

For my sweet wife had only one thought as to what our system lacked: A Bluetooth input into the downstairs receiver.

I thought about different solutions: A Bluetooth dongle, perhaps? We have a couple of those floating around for use in our older car that has an aux port.

But then, brilliantly, I thought: The upstairs cursed failed record player is only failing on the record player. All the other parts of it, including the tuner and the Bluetooth, presumably work just fine. So I brought it down. I had to cut the ties for the VCR and DVD player so I could stack them atop the larger all-in-one, but I added it, and now we have Bluetooth music in the basement. So we can play music through our large speakers again while sitting before the fire on a dark November night.

At any rate, the cables behind the television are tidy. I removed a couple–somehow, I had an extra HDMI cable and an extra component cable just tangled in the mess after ten years of treating the connections back there like a monkey at a phone switchboard. We are missing a couple of things, though. The Roku is gone; how long has it been since we streamed something on Amazon? Apparently, a while. Perhaps it’s under the television stand. Or perhaps it’s upstairs; its remote was up there, but it was not attached to that entertainment center or in the living room at all. We’re also missing the remote for the new downstairs receiver, which means we have to take a step or two to turn it on, set the input, and adjust the volume.

But, as I mentioned, I am pleased with how everything is working out so far. Between shifting the sofa downstairs and getting the electronics into working order, I feel like I’ve exerted some control over my environment, something I’ve been too lazy or too downtrodden to do much recently.