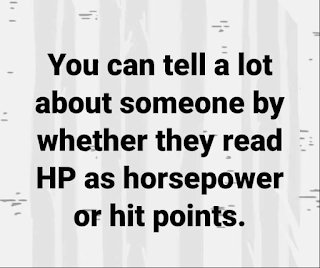 You know what else marks one kind of a person from another? Getting a new computer/laptop/device and immediately thinking, “Eh, what a chore to set it up” instead of “Cool! I can’t wait to try the new version of Civilization/other game that I bought this computer to run.” I mean, it marks me old that I still run computers for the most part and don’t get excited–or even get the latest mobile devices until the battery on my current one cannot take a charge. But it marks me older yet that I don’t jump right on the new computer, either.

Also, I am not much into gaming on the computer these days, so I don’t need the gee-whizzery of the latest modest improvement.

And even though I saw Hewlett Packard first, I think the other two are more fun.

UPDATE: I am not alone.

2 thoughts on “Someone Forgot One”