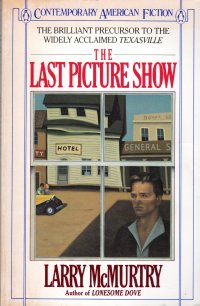 Well, as I mentioned, Larry McMurtry died while I was reading this book. I read Books: A Memoir in February, and I knew I had a couple of his novels on the shelves. I came across this one while I was looking for something to read before picking up Hud, the movie version of Horseman, Pass By.

And I came here to bury McMurtry, not to praise him.

This book, which the cover calls the precursor to Texasville even though this book and its movie came before the second book in what would eventually be known as the Thalia Trilogy and its movie. Published in 1966, the book is set a decade or so earlier in a small Texas town. It’s the sort of literary novel favored by serious artists and those who love them: The novel of pissing on where you came from, your home town where everyone is pitiable. So I did not like the book at all, and that’s before nine teenaged boys ran a train on a blind heifer and the novelist assured us that all the small town boys have sex with farm animals, if not cows and horses then dogs and chickens. Whatever is available. It’s not often that I call a book depraved, but here you go.

I mean, the main character or protagonist, such as it is, is a high school kid estranged from his father and lives in a rooming house with another high school friend. The friend is dating the daughter of one of the rich families in town, a girl who wants to be a legend in town and is a climber, always plotting her next move and/or boyfriend. The book is chock full of characters–the local coach, who might be a latent homosexual; his wife, Mrs. Robinson Ruth, who is turning forty and discovers orgasm with the protagonist; the owner of the pool hall/picture show/diner who is like a father figure to the town boys; and so on. You don’t really like any of them. Mostly, you pity them. The story, such as it is, follows a winter/spring/summer of the boys’ senior year, including football season, a trip to Mexico to score with some prostitutes, sexual escapades/adultery/sociosexual climbing and more prostitutes, it’s all pitiable and games until someone loses an eye, and then…. Well, it ends. To be taken up thirty years later in Texasville if you’re so inclined. I am not.

So this is why I like genre fiction. Because it has heroes and adventures, not normalish-but-quiet-desperation-amid-meaningless-sex vignettes.

I did flag a couple things to comment on, but I have decided not to bother except to bring up two points below the fold.

So. Yeah, not in a real hurry to read Hud now, but I might well pick it up soon or I might not ever.

On the other hand, I finally pronounce the second R in McMurtry every time, so there’s that. Maybe that will help on a trivia night sometime if ever such a thing ever happens again.